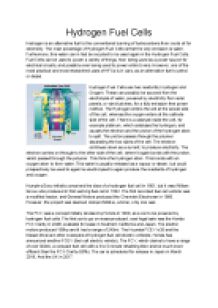 Transfer-Encoding: chunked ﻿Hydrogen Fuel Cells Hydrogen is an alternative fuel to the conventional burning of hydrocarbons from crude oil for electricity. The main advantage of Hydrogen Fuel Cells is that the only emission is water. Furthermore, this water can in fact be recycled to be used again in the Hydrogen Fuel Cells. Fuel Cells can be used to power a variety of things, from being used as a power source for electrical circuits, and possibly even being used to power entire towns. However, one of the most practical and most researched uses of HFCs is in cars, as an alternative fuel to petrol or diesel. ...read more.

There is a catalyst inside the cell, for example platinum, which catalyses the hydrogen, and causes the electron and the proton of the hydrogen atom to split. The proton passes through the polymer separating the two sides of the cell. The electron continues down as a current, to produce electricity. The electron carries on through to the other side of the cell, where it again bonds with the proton, which passed through the polymer. This forms the hydrogen atom. This bonds with an oxygen atom to form water. This water is usually released as a vapour or steam, but could prospectively be used to again be electrolysed to again produce the reactants of hydrogen and oxygen. ...read more.

The first car to go on mass-produced, road legal sale was the Honda FCX Clarity in 2008, available for lease in Southern California and Japan. The electric motors produced 108hp and it had a range of 240mi. The Hyundai FCEV ix35 and the Nissan Mirai are other examples of hydrogen fuel cell electric vehicles. Honda has announced another FCEV (fuel cell electric vehicle), The FCV, which claims to have a range of over 300mi, a compact fuel cell with a 3 to 5 minute refuelling time and be much more efficient than the FCX Clarity (60%). The car is scheduled for release in Japan in March 2016, And the UK in 2017. ...read more.