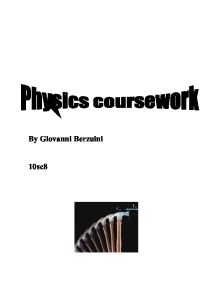 I am going to investigate what the effect of masses have on the movement of a margarine tub when it's fired by an elastic band. 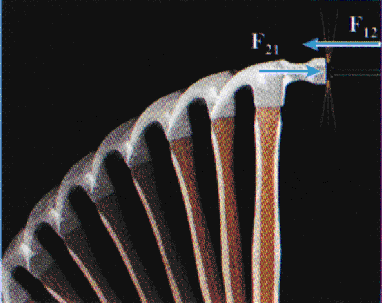 fired by an elastic band.

I’m going to measure the distance travelled by a tub, when different weights are put in it. I will have to set

up the experiment in a very accurate way, since to obtain reliable evidence some preliminary precautions will have to be taken. I conducted a trial experiment to get a beginning idea of the proceeding the experiment. I realised that in the planning of my experiment I hadn’t taken account of some factors, which would have made harder the procedure. I realised that when I pulled back the elastic, in order to fire the margarine tub; the stool moved making it hard to fire precisely the tub. This is because the force exercised on the elastic was transferred onto the stool, moving it. I consequently decided that a second agent force had to be exerted to balance out the force exercised to pull the elastic band, so that the stool would remain still. By applying a pressure upon the stool, exercised by my partner, we found out that we could carry out the experiment fairly. Another unexpected factor that we didn’t take account of, was the method in

Or in equation form:

I am able to represent mathematically my reasoning. In order to do this I am going to assign to each variable a random number. If, for example we had to find out the acceleration of an object of mass 2 g.

Which was by an external force of 10 Newton’s, by using the equation above we would figure out the answer is 5.

If we used an object with a bigger mass e.g. 5, keeping constant the external force exerted we would notice the acceleration has diminished to 2.

In order to make the experiment a fair test, I will have to keep some factors constant:

I retain that that I have conducted my experiment in a reasonably fair way. I tried to make my experiment fair in many ways: I attempted to keep constant the external force exercised; in order to do this the same person had to pull back the elastic band in each trial of the experiment. This can assure a fairly accurate outcome of the results, since the amount of energy exercised each time, should have been reasonably constant. Also we used the same firing procedure each time, that as we found out, makes the tub travel further. The accuracy with which we applied this procedure cannot be entirely verified, which will always leave us with a doubt on whether the experiment would have gone differently, but still if the efficiency of our procedure wasn’t exactly the same each time, the results couldn’t have been enormously altered. Overall though, I’m sure we have carried out the experiment in a fair way, because the results give us a clear idea of the pattern of the experiment. There are ways in which I could have improved my experiment: I could have made sure that the force applied to the tub was exactly constant each time, by using appropriate apparatus to fire the elastic band. Unfortunately we do not dispose of such equipment, therefore what we done was the best that could be done. By using more technical equipment I also would have made sure that the technique in which the tub was fired was more efficient. I would change the elastic band after each firing, to make sure it maintains in perfect condition.