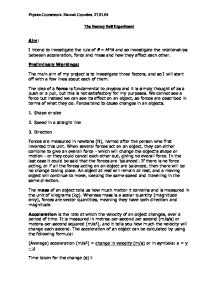 The main aim of my project is to investigate three factors, and so I will start off with a few lines about each of them.

The idea of a force is fundamental to physics and it is simply thought of as a push or a pull, but this is not satisfactory for my purposes. We cannot see a force but instead we can see its effect on an object, so forces are described in terms of what they do. Forces tend to cause changes in an objects.

2. Speed in a straight line

Forces are measured in newtons (N), named after the person who first invented this unit. When several forces act on an object, they can either combine to give an overall force - which will change the object's shape or motion - or they could cancel each other out, giving no overall force. In the last case it could be said that the forces are 'balanced'. If there is no force acting, or if all the forces acting on an object are balanced, then there will be no change taking place.

Overall I was quite pleased with what I have managed to take from the experiment, not so much the results but the information, which I have been able to take out of it. Although my results were the readings that I expected to take, I was very happy indeed with the procedure and the way in which I still managed to maintain fair conditions for it to take place. Of course if I did indeed do the experiment again I would have to take different aspects into consideration.

The main aim of my experiment was to prove that the higher you drop a ball from, the higher it will bounce overall. The bottom line is that I think I proved this point very well.

The next experiment that I would put into action would be either of the ideas that I have suggested in the last section so that my overall results would be closer to those that I had expected.