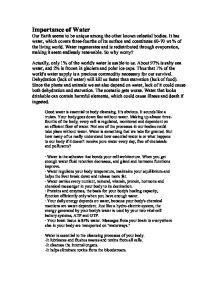 Importance of Water Our Earth seems to be unique among the other known celestial bodies. It has water, which covers three-fourths of its surface and constitutes 60-70 wt % of the living world. Water regenerates and is redistributed through evaporation, making it seem endlessly renewable. So why worry? Actually, only 1% of the world's water is usable to us. About 97% is salty sea water, and 2% is frozen in glaciers and polar ice caps. Thus that 1% of the world's water supply is a precious commodity necessary for our survival. Dehydration (lack of water) will kill us faster than starvation (lack of food). Since the plants and animals we eat also depend on water, lack of it could cause both dehydration and starvation. The scenario gets worse. Water that looks drinkable can contain harmful elements, which could cause illness and death if ingested. Good water is essential to body cleansing. It's obvious. It sounds like a truism. Your body goes down fast without water. Making up almost three-fourths of the body, every cell is regulated, monitored and dependent on an efficient flow of water. ...read more.

One of the primary functions of the liver is metabolize fat into energy for the body. If the liver needs to do some of the work of the kidneys, the liver can not work as it should to metabolize fat and so more fat is stored in the body increasing weight and not using the fat as energy. Water helps to maintain muscle stimulation in aiding muscles to contract by reducing dehydration. It is important to drink water before and after a workout. There is evidence that cold water burns calories. An average weight person, not over weight, relative to their physique should drink eight glasses a day - 8oz. or two quarts. If one is over weight or exercises with intensity regularly or if the weather is hot and dry, more water is needed. To emphasize: � Water suppresses the appetite. � Water metabolizes fat into energy. � Increasing water input, reduces fat deposits. � The body will not function properly without enough water and can not metabolize stored fat efficiently. � Retained water shows up as excess weight. � To get rid of excess water, one has to consume more water. ...read more.

This is the part of the process in which a plant obtains its' energy, and thus illustrates the importance of water to a plant. Water is absorbed from the root and is transported to all areas of the plant, this passage of water is called the [1]transpiration stream. Water is absorbed by the [2]roots of a plant, which possess many [3]root hairs with large surface areas for extensive absorbing of water. We have already discussed how [4]osmosis occurs across a [5]concentration gradient in preceding tutorials, and this is the case here. When water is required an the concentration of water in the roots is low, water is absorbed from the higher concentration of water found in the ground. This same occurrence goes for the concentration difference between cells, as the water rich root cells allow osmosis to occur up the plant until their is an equal concentration throughout the organism. Scientists were previously perplexed by the nature in which water could defy the force of gravity and move up the plant, since water molecules are heavier than the surrounding atmosphere. Through extensive studies, the following factors are thought to play a role in pushing water up the transpiration stream. ...read more.

***
A rather superficial look at a few selected aspects of why water is important. Some of the information sources used are not written in a scientific manner.