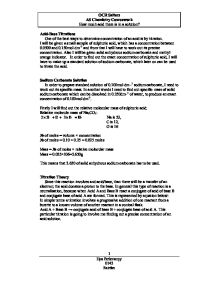 In order to find out the exact concentration of sulphuric acid, I will have to make up a standard solution of sodium carbonate, which later on can be used to titrate the acid. Titrations

Acid-Base Titrations One of the best ways to determine concentration of an acid is by titration. I will be given a small sample of sulphuric acid, which has a concentration between 0.0500 and 0.150mol dm-3 and from that I will have to work out its precise concentration. Also I will be given solid anhydrous sodium carbonate and methyl orange indicator. In order to find out the exact concentration of sulphuric acid, I will have to make up a standard solution of sodium carbonate, which later on can be used to titrate the acid. Sodium Carbonate Solution In order to prepare standard solution of 0.100mol dm-3 sodium carbonate, I need to work out its specific mass. In another words I need to find out specific mass of solid sodium carbonate which can be dissolved in 0.250dm-3 of water, to produce an exact concentration of 0.100mol dm-3. Firstly I will find out the relative molecular mass of sulphuric acid: Relative molecule mass of Na2CO3: Na is 23, C is 12, O is 16 ? of moles = volume � concentration ? of moles = 0.10 � 0.25 = 0.025 moles Mass = ? of moles � relative molecular mass Mass = 0.025�106=2.650g This means that 2.650 of solid anhydrous sodium carbonate has to be used. Titration Theory Since this reaction involves and acid/base, than there will be a transfer of an electron; the acid donates a proton to the base. In general this type of reaction is a neutralisation, because when Acid A and Base B react a conjugate of acid of base B and conjugate base of acid A are formed. This is represented by equation below: In simple terms a titration involves a progressive addition of one reactant from a burette to a known volume of another reactant in a conical flask. Acid A + Base B � conjugate acid of base B + conjugate base of acid A. ...read more.

Chemical Indicators A chemical indicator is a compound, which is capable of changing colour to indicate that the end-point of a titration has been reached. The colour change occurs, because the indicator is affected by the concentration of ions in a solution. Methyl Orange Methyl orange is a pH indicator, which is going to be used in this titration coursework. The reason behind using this type of indicator is that it provides a clear colour change. Since it is usually involved in titrations between strong acids and weak basis, than it should be ideal for this particular piece of coursework. Even though methyl orange does not have a full spectrum of colour change, compared to universal indicator for example, it provides a clearer end-point. Usually when a solution turns less acidic, turns from red > orange > yellow. Reverse effect occurs when solution increases in acidity. Furthermore the entire colour change only occurs in acidic conditions. Titration Curves Titrations can be recorded on titration curves, whose main compositions are almost always identical. The independent variable is considered to be the volume of a particular titrant, while pH of the solution is considered to be the dependent value. Below is a picture of a typical titration curve: The point at which all of the starting solution, usually an acid has been neutralised by a titrant is called an equivalence point. This point can be calculated by searching for a second derivative and than computing a point of inflexion. Sulphuric acid is said to be a polyprotic acids, because there is more than 1 acidic hydrogen present. This means that while titrating a polyprotic acid, the graph should show a sudden rise or an end-point for each of the protons in the acid. Therefore two protons will have tow corresponding end-points. The quality of the shape of the graph will gradually start to deteriorate for each successive point being present; so the first end-point is extremely obvious, while end-point number 2 is not as well defined, the same pattern is repeated for any further end-point. ...read more.

Another important point, which I think I should mention, is to practise different experimental techniques before actually performing the real titration. This way you should get a "feel" for the equipment and how it should be used. Especially practise reading off the values as accurately as possible and controlling the flow of sulphuric acid into the flask containing sodium carbonate solution. Further Improvements Obviously using high-end computer equipment would have reduced any possible errors dramatically, since all human error would have been eliminated. On the other hand I can say that there are some drawbacks present even with such sophisticated equipment, because first of all I would have to learn how to program the machinery specifically for this titration. Secondly I would have to understand how majority of equipment works, before I could actually use it in any way. Another point of finding out an exact point of neutralisation is by using a pH probe, which can be directly connected to a computer. Also being such equipment would not have being realistic considering the school budget. I think one of the main problems with this piece of coursework is the fact that you have estimate/judge by eye approximate colour change and neutralisation point. Due to the fact that this was my first ever titration that I did from scratch, I was not sure of the best possible way to describe the actual outcome of the titration and therefore I excluded prediction from this write up. Obviously any other experiment, excluding titrations has to have some sort of prediction section which relates to the possible outcome and results, but since all I have to find out in this piece of coursework is a titration of a solution. Even though I was given methyl orange is a choice of indicator I think that practically any indicator could have been used. For instance green methyl orange would have provided with significantly clear end-point compared to ordinary methyl orange, so instead of solution turning from red to orange, it would have turned to green instead. ...read more.