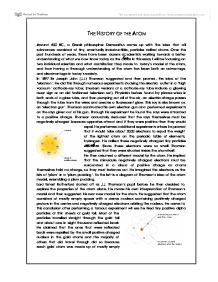 In this essay I will be focussing on two individual scientists and what contribution they made to todays model of the atom, and how having a thorough understanding of the atom has been both an advantage and disadvantage in todays society.

THE HISTORY OF THE ATOM Around 400 BC, a Greek philosopher Democritus came up with the idea that all substances consisted of tiny, eventually indestructible, particles called atoms. Over the past hundreds of years, there have been dozens of scientists working towards a better understanding of what we now know today as the atom. In this essay I will be focussing on two individual scientists and what contribution they made to today's model of the atom, and how having a thorough understanding of the atom has been both an advantage and disadvantage in today's society. In 1897 Sir Joseph John (J.J.) Thomson suggested and then proved, the idea of the 'electron'. He did this through numerous experiments studying the electric outlet in a 'high vacuum' cathode-ray tube; (modern versions of a cathode-ray tube include a glowing neon sign or an old fashioned television set). Physicists before found by places wires in both ends of a glass tube, and then pumping out all of the air, an electric charge passes through the tube from the wires and creates a fluorescent glow. ...read more.

He imagined the electrons as the bits of 'plum' in a 'plum pudding'. To the left is a diagram of Thomson's idea of the atom model, resembling a plum pudding. Lord Ernest Rutherford started off as J.J. Thomson's pupil before he then decided to explore the properties of the atom alone. He made his own interpretation of Thomson's model and then suggested his own new model for the atom. He suggested that the atom consisted of mostly empty space with a dense nucleus containing positively charged protons in the centre and negatively charged electrons orbiting the nucleus. He came to this conclusion after performing a famous experiment where he fired tiny positive alpha particles at thin sheets of gold foil. Most of the particles travelled straight through the gold foil and about one in eight thousand reflected back. He claimed that the ones that were reflected back were repelled by the small positive charged nucleus in the gold atoms and the majority of others that did travel through did so because each gold atom was made up of mostly empty space (a dense nucleus with orbiting electrons) ...read more.

We have been able to have a majority of people across the world gaining access to cars, a nice cushiony bed to sleep in, and many other luxuries created through the knowledge of atoms and their reactions with each other. Obviously these materials play a huge role in our every day lives and many question where we would be without them today. However producing these materials creates a huge amount of waste and environmental pollution, not to mention the waste and pollution that is exerted once using them. The creation of weapons is a good example of the impact the atom has had on the society. Weapons such as guns and knives kill far too many people every year, was it necessary for them to be made in the first place? This is one of the many arguments about artificial devices made up of atoms that maybe should never have been produced but with the knowledge we have today and the capabilities of scientists it seems it was inevitable and who's to know what will come next. ...read more.

The response to the question is very clear and very well laid out. However, from what the student states as their focus, I feel that the answer is unbalanced. The contribution of the scientists to the discovery and model of ...

The response to the question is very clear and very well laid out. However, from what the student states as their focus, I feel that the answer is unbalanced. The contribution of the scientists to the discovery and model of the modern atom is very detailed in response, whilst in contrast, the discussing of the advantages and disadvantages of the discovery and understanding of the atom has a very small weighting in the essay. The failure to address both parts of the question will lower the mark the student can obtain. I must also add that the presence of a bibliography to acknowledge the works used in aid of writing the essay is commendable.

The student has explained, for GCSE level, the experiments very well and clearly shows an understanding for them. Perhaps a picture of the experiments would have been useful in the essay, as it might have aided their description of the setup of the experiment and how it was carried out. An interesting conclusion was reached with regards to the disadvantages of the atom. I would disagree that the understanding of the atom caused an increase to the killings of people every year through the development of weapons. Obviously a better understanding of the atom allowed for the manipulation of materials which would go on to create powerful weapons, but likewise, the counterargument is that such materials are also used to create defences as well. Personally, one main problem that the understanding of atoms poses to society today is the control of nuclear power. Whilst this is very useful in producing energy in an age where crude oil is running low, a nuclear threat is much more dangerous than a gun or knife (examples of weapons the student gives). Otherwise, the judgements made in the essay were supported by appropriate content but the weighting of each part of the question could have been more evenly spread.

There are a few grammatical errors but otherwise the quality of written communication is good. The technical terms are used well in the essay with the exception of the student called the ray from a cathode-ray tube Ã¢â‚¬Å“an Ã¢â‚¬Ëœelectron gunÃ¢â‚¬â„¢Ã¢â‚¬Â. The student follows the typical convention of using diagrams to aid their answer and structures the answer in distinct Ã¢â‚¬ËœsectionsÃ¢â‚¬â„¢, distinguishing between discovery and then the advantages and disadvantages. For a science piece of work, this is a very good approach to take at GCSE level. The linkage between the Ã¢â‚¬ËœsectionsÃ¢â‚¬â„¢ was spot on as well, something which perhaps some students struggle to do.