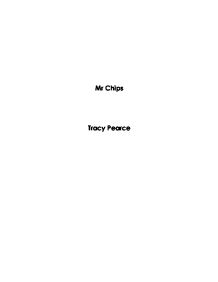 In this investigation the main aim is to find out how many grams of salt (sodium chloride NaCl) Mr Chips should add per litre of water to make an isotonic solution to put his chips in were they will not gain or lose water weight through osmosis.

* Each chip was placed on and weighed individually. * The weight was recorded in the column before part of table beside the name of the test tube the chips would be put in. * All the chips were placed back on the tile in front of the according labels. * Three chips were placed in each of the 6 test tubes. * The timer was set for a maximum of 45 minutes. * During the 45 minutes the cork borer and the razor blade were washed carefully and put away, as they will not be used again. * After 45minutes the water was drained from each of the 6 test tubes. * The 3 chips from each test tube were placed on a piece of blotting paper to soak up access water, in front of the according labels on the tile. * The chips were taking to the balance again to be weighed individually. * The balance was zeroed. * The weighing boat was placed on the balance and it was zeroed again. * Each chip was placed on the balance and weighed. * The balance was zeroed before each new chip was put on. ...read more.

Although there were no notable issues, the method used could have created possible problems and tarnished the accuracy of the results. For example, some results were not as close to the line of best fit as others-this could have been due to human error as the potato chips were cut approximately the same size by hand. They could have been measured individually with a mm rule to make the investigation more precise. Solutions could have been measured out more accurately using a new measuring cylinder each time. This would insure that there was no cross contamination of the solutions with each other. Also each chip could have been weighed more accurately to the nearest 0.001g instead of 0.01g. Each chip could also have been dried in the same manner for the same length of time to ensure accuracy. Overall the investigation was fairly accurate as the results are supported by the conclusion and are reliable and precise. The investigation could have been improved with changes to the method, and the conclusion could have been made more certain with improvements to the line of best fit and the way the graph was plotted. A smaller scale could have been used to plot the graph, thereby making the difference within error bars easier to read and a conclusion easier to deduce. ...read more.