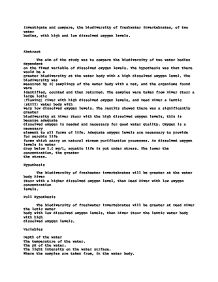 Investigate and compare, the biodiversity of freshwater invertebrates, of two water bodies, with high and low dissolved oxygen levels.

Dead River is a lotic water body, it should have lower dissolved oxygen levels than River Stour a lentic water body because, areas of water such as ponds or lakes, in which the water does not move, suffer from pollution more than rivers as they are not able to get rid of the pollutants as effectively as a river, or any other fast moving water body. As the water becomes more polluted, there are more organic nutrients available for the bacteria to break down which leads to an increase in mineral salts. This is known as eutrophication ("good eating" conditions). However, the breakdown of these nutrients leads to a depletion in oxygen and an increase in CO2, which can lead to the death of many of the other organisms such as fish and invertebrates, which depend on the ecosystem remaining balanced. Eutrophication encourages the growth of algal blooms, which cover the surface and prevent light from reaching the submerged plants in the water thus preventing photosynthesis. The problem is greatly enhanced at night-time, when plants have been unable to produce sufficient levels of oxygen for the invertebrates to respire. Eutrophication has the following effects on the ecosystem: 1. affects animals, by causing lower oxygen levels, too low for animals to respire effectively 2. increases turbidity / cloudiness, reducing light levels and thus reducing photosynthesis by plants 3. increase substrate (fine muds), which block the gills of many organisms. An example of an excellent stream site with high dissolved oxygen levels; Here we find a variety of organisms with very different body shapes and ways of making a living. High biodiversity (or taxa richness) indicates a site with low human influence: Several different types (or taxa) ...read more.

Dissolved oxygen is required by all aquatic animals. Low dissolved oxygen levels (hypoxia) can impair animal growth or reproduction, and the complete lack of oxygen (anoxia) will kill animals. Animals with limited mobility such as molluscs are particularly vulnerable to hypoxic or anoxic conditions, which is why many of the immobile species found at River Stour could survive but were not found at Dead river. However some species like red midge larva can be found in water bodies such as Dead river as they have adapted, and contain hemoglobin which allows them to store oxygen to survive in areas with very low oxygen. Although the results have proved the hypothesis and the variables taken into consideration there were limitations that affected the investigation, the sampling method was unlikely to catch every species in the water body even after 12 samples, therefore the results are only an estimate of the true biodiversity of the water body. Also many of the freshwater invertebrates although of a different species look very similar and are difficult to distinguish, although a hand lens, and a identification sheet was used, accuracy couldn't be guaranteed. With more time, more samples could have been taken to attempt a better estimate at the true biodiversity of the water body, a more exact identification procedure could have also been developed, the sites used were perfect examples of an excellent and poor site for maintaining life. The biological significance of this investigation has shown how a excellent site that can support a rich biodiversity, can very easily become a poor site, freshwater invertebrates are the most sensitive to organic pollution which takes up the oxygen from rivers, this investigation shows just how much of a difference dissolved oxygen levels have on the biodiveristy of a water body, and the effect organic pollution such as nitrates and phosphates have on dissolved oxygen levels. ...read more.