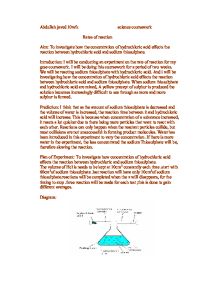 The volume of Hcl is needs to be kept at 10cm3 constantly each time .start with 60cm3of sodium thiosulphate .last reaction will have only 10cm3of sodium thiosulphate.reactions will be completed when the x will disappears, for the timing to stop .three reaction will be made for each test ;this is done to gain different averages. Diagram: Apparatus: * Measuring cylinder(50cm3) * Small measuring cylinder * Conical flask(100cm3) * Sodium thiosulphate * Hydrochloric acid * Water * Stop watch * 2 beakers. * Paper with "x" on it Method: * Put 1.15 of calcium carbonate into the test tube. * Place the rubber bung connected to the gas syringe. ...read more.

I can see that as the concentration increased, the amount of gas produced was produced faster and more of it was produced. Evaluation: If I had waited longer, and continued recording the results until the time was up rather than until nothing could be seen. As when nothing could be seen the experiment could still be happening but very little could have been happening. I should have also have recorded my results every 5 seconds rather than 10 seconds to get more results to analyze. I would make sure I used the all the same apparatus if I had to continue my experiment at a different time because different apparatus have different measurements and that would effect the experiment. ...read more.