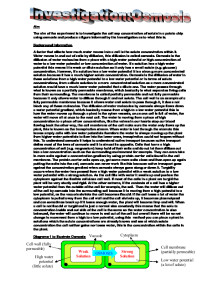 Investigate the cell sap concentration of solute in a potato chip using osmosis and produce a figure informed by the investigation as to what this is.

The solutions were stirred well so that the sugar would dissolve in the water and not just settle at the bottom. The intervals of the % solute variable were all even which meant it was much easier to measure and therefore fairer as less random errors would occur when measuring. Safety was not much of a hazard in this experiment because it did not involve hot or toxic materials, however, care was taken when using the knife, beakers and tweezers and a tile was used when cutting as to not damage the wooded desk. Analysis The graph shows a good negative correlation and all the results follow a basic trend near or close to the line of best fit. An average of all the results was calculated after the graph was drawn, it helps to support the graphs correlation as the average actually lies right on the line of best fit. On the graph the point at which there is no net movement of water in or out of the chips is 6%; this result supports the prediction that was estimated at between 0% and 10% yet not the two extremes. The graph also helps to explain what is happening to the cells in solutions that are different from 6%. For example at 0% concentration the graph show that the chips gained in weight by an average of 10.4%, this means that water had entered the cells so their mass had increased. Water must have entered the cells because the solute concentrations in the chips were larger than the solute concentration outside of the chips. They would have had a lower water potential due to the fact that they had more solute in them so the water would flow by osmosis (diagram 1) down the water potential gradient and into the cells of the chips in this case. At 5% solute concentration the chips also gained in weight yet not as much as they did at 0%, they gained in weight for the same ...read more.