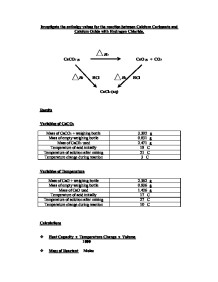 Investigate the enthalpy values for the reaction between Calcium Carbonate and Calcium Oxide with Hydrogen Chloride.

250.0 C, this gave inaccurate results as the highest temperature recorded was 27 C, so I should have been provided with a thermometer with a range of up to 50 C. The measuring cylinder supplied for the measurement of Hydrochloric Acid was 100 cm , whereas I only had measure 50 cm so this may have caused an error. Also when pouring the Hydrochloric Acid into the beaker some may have been left in the bottom of the measuring cylinder meaning the results may have been inaccurate. Significant Errors However, a digital thermometer would show much more accurate temperature changes which are particularly vital when dealing with small temperature changes such in the instance of reaction 1. This would decrease the percentage error between actual and theoretical results of enthalpy change. ...read more.