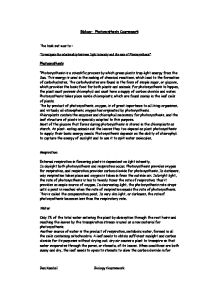 Investigate the relationship between light intensity and the rate of Photosynthesis

Another source of water is the product of respiration, metabolic water, formed in all the cells containing mitochondria. A leaf needs to obtain sufficient sunlight and carbon dioxide for its purposes without drying out; dry air causes a plant to transpire so that water evaporates through the pores, or stomata, of its leaves. When conditions are both sunny and dry, the leaf needs to open its stomata to allow the carbon dioxide in for photosynthesis. But the need to make sugars has to be balanced against the danger of losing too much water. Chemical process The chemical reactions of photosynthesis happen in two stages. During the light reaction sunlight is used to split water (H2O) into oxygen (O2), protons (Hydrogen ions, H+), and electrons, and oxygen is given off as a by-product. In the dark reaction, for which sunlight is not required, the protons and electrons are used to convert carbon dioxide (CO2) into carbohydrates (Cm(H2O) n). The word equation for this is CO2 + 2H2O) ...read more.

The test needs to be Fair. Light energy produces heat energy. To prevent the heat energy affecting the experiment I will place a beaker of water in front of the lamp. So maximum light will still reach the plant, and heat wont effect the experiments. I will set up the experiment as shown below: The equipment used will be: Lamp Syringe End Pondweed Beaker of water Beaker containing 0.5 % Sodium Bicarbonate solution ( as source of C02) Funnel The readings I would need to take would be the measurable amount of oxygen being given out by the plant. The oxygen would rise up and I could then measure it with the inside of the syringe. I would need to do the experiment from at least 3 distances, 3 different times to work out a reasonable average for each distance. I could then compare results with other pupils to get a more accurate average. I predict that more light equals more oxygen. If I put the light closer more oxygen would be given out, whereas if I put the light further away less oxygen would be given out from the plant. Ben Kendall Biology Coursework ...read more.