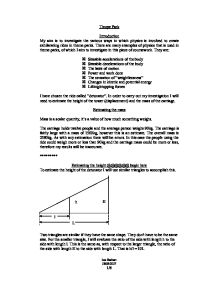 Investigate the various ways in which physics is involved to create exhilarating rides in theme parks.

I have chosen the ride called “detonator”. In order to carry out my investigation I will need to estimate the height of the tower (displacement) and the mass of the carriage.

Mass is a scalar quantity, it’s a value of how much something weighs.

The carriage holds twelve people and the average person weighs 90kg. The carriage is fairly large with a mass of 1500kg, however this is an estimate. The overall mass is 2580kg. As with any estimation there will be errors. In this case the people using the ride could weigh more or less than 90kg and the carriage mass could be more or less, therefore my results will be inaccurate.

To estimate the height of the detonator I will use similar triangles to accomplish this.

Two triangles are similar if they have the same shape. They don't have to be the same size.

I obtained these results with a digital stopwatch. In order to get the best results I worked out an average time for each stage of the ride stated. I collected 5 results for each section and worked out the average to give me a more accurate reading. Human error could also play a part in the inaccuracy of these results.

Below is the results for the time, velocity and displacement for each stage of the ride.

Galileo was the man who discovered the theory known as free fall. Galileo discovered this by dropping balls of different mass from the Leaning Tower of Pisa. This led to the conclusion that all objects free fall at the same rate, despite their mass. Anything in free fall is only subjected by the force of gravity which is -9.81ms-2.

I will use the following formula to see whether the detonator’s acceleration is -9.81ms:

All I have to do is insert the known values to find my answer.

As you can see my result is near to that of Galileo’s, but Because of things like human error and estimations my result is 0.21ms-2 out.

The sensation of weightlessness

The sensation of weightlessness is caused by the rider not feeling an outside force upon their bodies. At the free-fall stage, a 60kg rider would feel 589N of force from the seat pushing as an external force upon their body, enabling the rider to feel their normal weight. When the carriage descends the force of the seat is removed, the sensation of weightlessness is achieved. During this brief encounter the rider hasn’t lost any weight, just the absence of the external seat force.

Possible future developments to the ‘Detonator’?

It would be good to see the detonators height increase to maybe double its length. This would enable the rider a long period of weightlessness and make it more thrilling than it already is. Increasing the height would increase the gravitational potential energy making the carriage loose more kinetic energy making the descent quicker and faster.

After concluding my investigation, I’m pleased with the final results. To improve upon this I would have done the following: