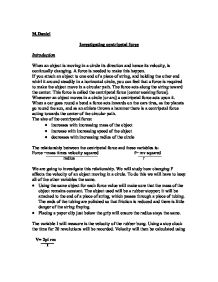 When an object is moving in a circle its direction and hence its velocity, is continually changing. A force is needed to make this happen.

If you attach an object to one end of a piece of string, and holding the other end whirl it around steadily in a horizontal circle, you can feel that a force is required to make the object move in a circular path. The force acts along the string toward the center. This force is called the centripetal force [center seeking force]. Whenever an object moves in a circle [or arc] a centripetal force acts upon it. When a car goes round a bend a force acts inwards on the cars tires, as the planets go round the sun, and as an athlete throws a hammer there is a centripetal force acting towards the center of the circular path.

The size of the centripetal force:

If I double the mass [the force will double], I think V will also double.

Personally I believe the investigation was well, as we carried it out as planned. The results where good, they where what I expected. However, I did receive one anomaly. It should have slightly lower in time. The anomalous result was slightly lower than expected. The cause of the anomaly could have been many things, from applying too much pressure to a change in the radius. [By accident] I could improve my method to not get any anomalies by the following:

I could extend this investigation by testing the centripetal force in different ways, like at an angle, or at various equilibrium. Or altering the mass of the rubber bung. Altering the mass would be the most suitable way of extending this investigation, we could see what happens if there is a larger centripetal force. [By increasing mass, see if there is still a pattern between even mass changes-e.g. 700 , 800 etc.]