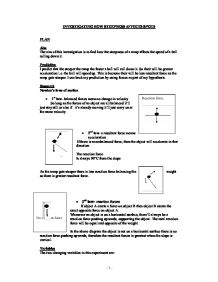 The aim of this investigation is to find how the steepness of a ramp affects the speed of a ball rolling down it.

I predict that the steeper the ramp the faster a ball will roll down it. So their will be greater acceleration i.e. the ball will speed up. This is because their will be less resultant force as the ramp gets steeper. I can back my prediction by using forces as part of my hypothesis.

So long as the forces of an object are all balanced it’ll just stay still or else if   it’s already moving it’ll just carry on at the same velocity.

If there is an unbalanced force, then the object will accelerate in that direction.

Is always 90°C from the slope

As the ramp gets steeper there is less reaction force balancing the weight so there is greater resultant force.

Whenever an object is on a horizontal surface, there’ll always be a reaction force pushing upwards, supporting the object.  The total reaction force will be equal and opposite of the weight.

The aim of this investigation is to investigate how steepness affects speed so I will use the following formula to work out the speed of each ball from the average result.

From the above set of results I can see that as I increased the height it took less time for the ball(s) to roll down the ramp. Because as the ramp gets steeper there will be less force balancing the weight, thus, there will be a greater resultant force. However I only tried two different heights so the results are not very reliable.

After carrying out my preliminary work I realised that I could have made the test more reliable. For my actual experiment I will use six different heights and repeat each experiment five times to get more accurate results. Also I will calculate the angle of the ramp at each stage to ensure my results are correct.

I think it is important to space my heights out in a suitable range so it enables me to observe clearly how the steepness affects the speed. I am going to use the following heights: 4cm, 7cm, 15cm, 18cm, 23cm, and 30cm.

After carrying out my Preliminary run I realised that I could have made the test more accurate to get more reliable results. In my experiment I will take in to consideration the following;

I will calculate this angle

Safety is very important in a scientific experiment even if the experiment may seem harmless. To make this experiment safe I will make sure equipment is always handled with a lot of care to avoid an accident.  Also I will not run around as one could get hurt. Also I will keep the desktop that I am working as clean as possible, so that there is nothing on the desktop, except for the apparatus needed thus; an accident does not happen. If an accident does occur I will inform the teacher straightaway.

On the whole I think my experiment went really well. I believe that I carried out my experiment reasonably, and I encountered no problems. As a result I ended up with an applicable set of results.

I could carry out another experiment that would be quite similar to this one. I could investigate how the mass of a ball affected the speed. The two changing variables would be the weight of the ball and the steepness of the slope. Fair testing and safety would be just as important. I would have to use the same apparatus and overall the same method. Also all the improvements I mentioned above I could use for this experiment.