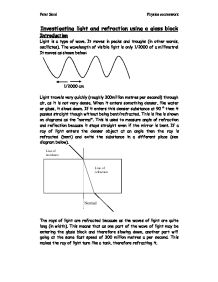 Investigating light and refraction using a glass block Introduction Light is a type of wave. It moves in peaks and troughs (in other words, oscillates). The wavelength of visible light is only 1/2000 of a millimetre! It moves as shown below: 1/2000 cm Light travels very quickly (roughly 300million metres per second!) through air, as it is not very dense. When it enters something denser, like water or glass, it slows down. If it enters this denser substance at 90 � then it passes straight though without being bent/refracted. This is line is shown on diagrams as the "normal". This is used to measure angle of refraction and reflection because it stays straight even if the mirror is bent. If a ray of light enters the denser object at an angle then the ray is refracted (bent) and exits the substance in a different place (see diagram below). The rays of light are refracted because as the waves of light are quite long (in width). This means that as one part of the wave of light may be entering the glass block and therefore slowing down, another part will going at the same fast speed of 300 million metres a per second. ...read more.

Preliminary Work Before I actually do the experiment, I thought some preliminary experiments might be useful. For a start the most accurate results will need the thinnest rays of light coming from the ray box. I changed the distance from the bulb to see how that affected the width of the ray of light. The table below show the results of that experiment. Distance from Bulb (cm) Ray width (mm) 7.5 1 7 2 4.5 2.5 4 2.8 0 4 These results show that the further away from the further away from the bulb you get, the thinner the ray of light. This is because the further away from the source of light you get, the smaller the amount of rays that can be given off at an angle and thus widening the ray, decrease. It is obvious that using a thinner slit in the slides will help to thin the ray. So because of this, I'm using the narrowest slit in a slide I can find. Results I did the experiment and these are the results I got. The graph is attached. Angle of Incidence Angle of refraction MK:I Angle of Refraction MK:II Average Angle of Refraction 0� 0� 0� 0� 10� 8� 7� 7.5� 20� 13� 14� 13.5� 30� 20� 20� 20� 40� 25� 26� 25.5� 50� 32� ...read more.

the way the experiment was done was inaccurate, all the other results could have been inaccurate and this could be the only accurate one, but that is unlikely. Our method though was pretty inaccurate. It all counted on eye judgement which isn't very accurate. So because of this I think the reason for the odd result was an incorrect reading from me or one of the people helping me with the experiment, as the evidence (the inaccuracy of the result taking) points towards this conclusion, but we shall never know for sure. We could look at other results in the class to see if their results matched ours, as the odd result could be there on all of them, but it would still just make us certain about our idea, when it could be something different. The experiment could have been done using far more precise measuring equipment then a protractor. The result could also have been measure and recorded by a computer, which (if set up correctly) would be far more accurate, but we just didn't have the resources, time or money to do that. One thing we could have done to make the experiment more accurate though is to take more results and take the average. This would have made the results more accurate. Peter Sen� Physics coursework ...read more.