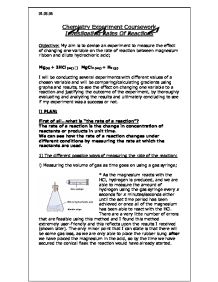 Chemistry Experiment Coursework Investigating Rates Of Reactions Objective: My aim is to devise an experiment to measure the effect of changing one variable on the rate of reaction between magnesium ribbon and dilute hydrochloric acid; Mg(s) + 2HCl (aq) � MgCl2 (aq) + H2 (g) I will be conducting several experiments with different values of a chosen variable and will be comparing/calculating gradients using graphs and results, to see the effect on changing one variable to a reaction and justifying the outcome of the experiment, by thoroughly evaluating and analyzing the results and ultimately concluding to see if my experiment was a success or not. i) PLAN: First of all...what is "the rate of a reaction"? The rate of a reaction is the change in concentration of reactants or products in unit time. We can see how the rate of a reaction changes under different conditions by measuring the rate at which the reactants are used. 1) The different possible ways of measuring the rate of the reaction: i) Measuring the volume of gas as time goes on using a gas syringe; * As the magnesium reacts with the HCl, hydrogen is produced, and we are able to measure the amount of hydrogen using the gas syringe every x seconds for x minutes/seconds either until the set time period has been achieved or once all of the magnesium has been able to react with the HCl. There are a very little number of errors that are feasible using this method and I found this method extremely user-friendly and this reflects upon the results I received (shown later). The only minor point that I can state is that there will be some gas loss, as we are only able to place the rubber bung after we have placed the magnesium in the acid, so by the time we have secured the conical flask the reaction would have already started. ...read more.