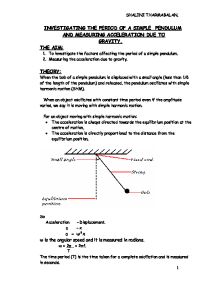 Investigating the period of a simple pendulum and measuring acceleration due to gravity.

INVESTIGATING THE PERIOD OF A SIMPLE PENDULUM AND MEASURING ACCELERATION DUE TO GRAVITY. THE AIM: 1. To investigate the factors affecting the period of a simple pendulum. 2. Measuring the acceleration due to gravity. THEORY: When the bob of a simple pendulum is displaced with a small angle (less than 1/6 of the length of the pendulum) and released, the pendulum oscillates with simple harmonic motion (SHM). When an object oscillates with constant time period even if the amplitude varies, we say it is moving with simple harmonic motion. For an object moving with simple harmonic motion: * The acceleration is always directed towards the equilibrium position at the centre of motion, * The acceleration is directly proportional to the distance from the equilibrium position. So Acceleration - Displacement. a - x a = ?�x ? is the angular speed and it is measured in radians. ? = 2? = 2?f. T The time period (T) is the time taken for a complete oscillation and is measured in seconds. A pendulum is a body suspended from a fixed point and it is free to swing in a vertically plane. A pendulum will oscillate with simple harmonic motion provided that the amplitude is small. ...read more.

If the string is not held securely then it might detach from the wooden block and since the string has the bob attached to it, it might hurt anyone nearby. When I carry out my experiment I will make sure that I follow all these safety precautions to provide a safe environment to work in. IMPLEMENTING: PROCEDURE: Before I started the experiment I made sure that I had drawn an appropriate table to record my results. I then made sure that I set my apparatus up properly like the one shown in the diagram in the method. While I was setting it up I made sure that the string was clamped tightly between the wooden blocks. If it was not tightly clamped then the length wouldn't be reliable. After setting up the apparatus I made sure that the length of the pendulum was 0.10m. I also made sure that I measured the length from the centre of the bob to the fixed point. I then moved the pendulum through a small angle and released it. I started the stop clock when I released the pendulum. I noted the time it took to complete 20 oscillations. I took 20 oscillations as the time taken to pass the mark on the table twenty times in the same direction. ...read more.