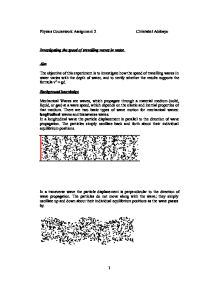 Investigating the speed of travelling waves in water.

Investigating the speed of travelling waves in water.

The objective of this experiment is to investigate how the speed of travelling waves in water varies with the depth of water, and to verify whether the results supports the formula v2 = gd.

Mechanical Waves are waves, which propagate through a material medium (solid, liquid, or gas) at a wave speed, which depends on the elastic and inertial properties of that medium. There are two basic types of wave motion for mechanical waves: longitudinal waves and transverse waves.

In a longitudinal wave the particle displacement is parallel to the direction of wave propagation. The particles simply oscillate back and forth about their individual equilibrium positions.

In a transverse wave the particle displacement is perpendicular to the direction of wave propagation. The particles do not move along with the wave; they simply oscillate up and down about their individual equilibrium positions as the wave passes by.

Water waves are an example of waves that involve a combination of both longitudinal and transverse motions. As a wave travels through the waver, the particles travel in clockwise circles. The radius of the circles decreases as the depth into the water increases.

Where v = speed, f = frequency, and λ = wavelength.  The speed of the wave is directly proportional to the wavelength.

The waves travelled very fast at depths of 3.5cm and 4.0cm, which made it quite difficult for me to time. In order to solve this problem, this experiment could be repeated, but the distance from which the waves are timed could be increased, to about 50cm.  (This would mean that the container would have to be much bigger, since the length of the tray would be too short).  This would enable me to visually see the travelling waves much better, and so it would be easier for me to time the wave.  This would greatly increase the accuracy of the time results.

As well as this, I could also increase the depth of the water investigated up to 20 cm.  This would give me a bigger range of results, making the results more reliable.

A mechanism can be used to lift and lower the tray.  This would ensure that the tray is always lifted at exactly the same height and speed all the time.  This would therefore make the experiment more precise.

In order to extend this investigation further, I would investigate whether the height at which the tray is lifted, affects the speed of the wave pulse created.  This would help me to know how important and effective it was for me to lift the tray to the same height at all times and subsequently to know the amount of error that lay with this factor.