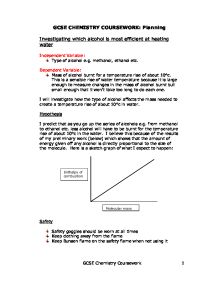 Investigating which alcohol is most efficient at heating water

GCSE CHEMISTRY COURSEWORK: Planning Investigating which alcohol is most efficient at heating water Independent Variable: * Type of alcohol e.g. methanol, ethanol etc. Dependent Variable: * Mass of alcohol burnt for a temperature rise of about 10�c. This is a sensible rise of water temperature because it is large enough to measure changes in the mass of alcohol burnt but small enough that it won't take too long to do each one. I will investigate how the type of alcohol affects the mass needed to create a temperature rise of about 10�c in water. Hypothesis I predict that as you go up the series of alcohols e.g. from methanol to ethanol etc. less alcohol will have to be burnt for the temperature rise of about 10�c in the water. I believe this because of the results of my preliminary work (below) which shows that the amount of energy given off any alcohol is directly proportional to the size of the molecule. Here is a sketch graph of what I expect to happen: Safety * Safety goggles should be worn at all times * Keep clothing away from the flame * Keep Bunsen flame on the safety flame when not using it Apparatus * Tin can * 300ml measuring cylinder * Clamp stand and boss * 8x spirit burners (one for each alcohol) ...read more.

The data was reliable enough to firmly support my conclusion. The fact that there was not much scatter shows this. However, the data was reliable but inaccurate because of the problems outlined below. If the data obtained was completely accurate then it would be on the theoretical data line. Experimental errors: It was impossible to get all the energy of the burning alcohol, using our equipment, into the can. Some inevitably escaped around the can and into the room. This explains why our results showed slightly more alcohol needing to be burned than the theoretical amount. Sources of experimental error: * Not all heat getting into the water (most escaped around the can or heated up the can) * Draughts blowing in from outside Modifications: If I was to do this experiment again I might either use a different calorimeter than a tin can i.e. one that conducted heat into the water more efficiently or simply put a lid on the can and insulate it. I would also do the experiment in an environment out of the open air to stop air currents changing my results and to concentrate the heat onto the water, rather than the air around. Further Work: I might do the same experiment but using alkanes instead of alcohols. I would investigate as to whether they produce the same trend as with alcohols and see whether they are more or less efficient. ?? ?? ?? ?? GCSE Chemistry Coursework 1 ...read more.