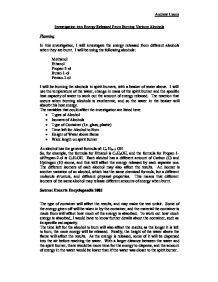 In this investigation, I will investigate the energy released from different alcohols when they are burnt.  I will be using the following alcohols:

I will be burning the alcohols in spirit burners, with a beaker of water above.  I will use the temperature of the water, change in mass of the spirit burner and the specific heat capacity of water to work out the amount of energy released.  The reaction that occurs when burning alcohols is exothermic, and so the water in the beaker will absorb this heat energy.

The variables that could affect the investigation are listed here:

An alcohol has the general formula of: Cn H2n+1 OH

So, for example, the formula for Ethanol is C2H5OH, and the formula for Propan-1-ol/Propan-2-ol is C3H7OH.  Each alcohol has a different amount of Carbon (C) and Hydrogen (H) atoms, and this will affect the energy released by each separate one.  The different isomers of each alcohol may also affect the results.  An isomer is another variation of an alcohol, which has the same chemical formula, but a different molecule structure, and different physical properties.  This means that different isomers of the same alcohol may release different amounts of energy when burnt.

I will wait a few seconds, and then take a measure from the thermometer for temperature.  I will then measure the mass of the spirit burner (making sure to keep the cap on).  I will record both these values.I will repeat the above steps, using the alcohol methanol, two more times to get repeated results.  When I have finished repeating the methanol results, I will collect a different spirit burner with ethanol in it.  I will then repeat all of the above steps once more, but this time using ethanol rather than methanol.I will repeat the experiment using ethanol two more times after the first, and then move onto the next alcohol, propan-2-ol.  When I have repeated propan-2-ol two more times after the first, I will move onto butan-1-ol.  After three butan-1-ol results, I will move onto the final alcohol, pentan-1-ol.Once I have all my results recorded, I will clear away the apparatus.

To keep the investigation safe, I will have to check a few things:

After completing the investigation, I got the following results for temperature of the water and the mass of the spirit burner:

The mass was measured with a precise balance for accurate results, and the temperature with a thermometer.  To get the values for change in mass and temperature rise, I will subtract the lower value from the higher value.

I would use the same isomer of alcohol each time, so that I would get consistent results.  I would also measure the energy in other items such as the beaker, so that I could get much more accurate results, and this would allow me to form an even firmer conclusion.

If I were to further extend this investigation, I could investigate the other variables.

The main variable is isomers of the alcohols.

I would also compare the 2-ol results with the results from this investigation, and I would also work out new theoretical results so that I could form a conclusion, and see how the different isomers vary from each other.

**** A sound report that has made good use of the collected data but could be improved by greater consideration being given to the evaluation.
To improve
Planning
The plan needs a thorough risk assessment to be included. It would help if greater consideration were given to how to limit heat loss in the experiment during the planning stage.
Carrying out
Valid data seems to have been recorded but some headings in tables are misleading or missing key columns and units. The values calculated do not seem to agree with published data.
Conclusion and Evaluation
The conclusion makes some reference to the relevant scientific theory and refers to possible anomalies. Whilst there are some ideas for extending the work there are no suggestions included that would modify the apparatus to help improve the main problem of heat loss.