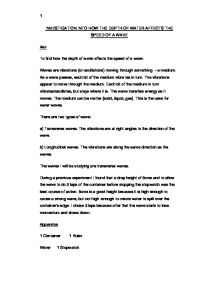 Investigation Into How the Depth of Water Affects the Speed of a Wave.

To find how the depth of water affects the speed of a wave.

Waves are vibrations (or oscillations) moving through something - a medium. As a wave passes, each bit of the medium vibrates in turn. The vibrations appear to move through the medium. Each bit of the medium in turn vibrates/oscillates, but stays where it is. The wave transfers energy as it moves. The medium can be matter (solid, liquid, gas). This is the case for water waves.

There are two types of wave:

a) Transverse waves. The vibrations are at right angles to the direction of the wave.

b) Longitudinal waves. The vibrations are along the same direction as the waves.

The waves I will be studying are transverse waves.

During a previous experiment I found that a drop height of 5cms and to allow the wave to do 3 laps of the container before stopping the stopwatch was the best course of action. 5cms is a good height because it is high enough to cause a strong wave, but not high enough to create water to spill over the container’s edge. I chose 3 laps because after that the wave starts to lose momentum and slows down.

I did observe one anomalous result, attempt 9 at a depth of 8cm when the wave was timed taking 1.80 seconds. This was not consistent with the other results taken for that depth and so was re-timed, giving a more likely time of 1.69 seconds. The anomalous result was most likely due to either the stopwatch being started before the container had been dropped, or the container being dropped at the wrong height.

Yet I did observe the results I expected, had only one anomalous result and followed the rules of my plan making it as fair a test as possible. My investigation was conducted safely and without any setbacks. I therefore, considering the above, believe my experiment was fairly accurate but could be improved upon by considering the previous points.

To expand and improve upon my investigation I could: -

· Wedge a level object under the container and remove it from underneath to drop the container. This would determine that the dropping height remained constant.

· Use a wider range of depths.

· Use more accurate apparatus for measuring time and distance.

All of these would enable me to make more detailed and accurate conclusions.

Ultimately I think my

I personally think that the results I gained where correct and I am very happy with the way that the experiment went. The graph shows a smooth curve, which suggest to me, and anyone reading it, that my prediction was very incorrect. I predicted that if I changed the height at which I dropped the container it would change the speed considerably but it didn’t so I was wrong.

My conclusion to this experiment would be that the experiment I did didn’t really help us to find out the difference in the speeds of waves. So to help us gather better results for this purpose I would suggest another different experiment. I would suggest changing the height of the water. Instead I believe that this would gain much better results. If I had done this experiment I expect that I would have gathered a lot more about the differences in the speed of waves.