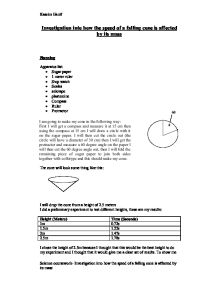 Investigation into how the speed of a falling cone is affected by its mass.

I will drop the cone from a height of 2.5 meters

I did a preliminary experiment to test different heights, these are my results:

I will time how long it takes the cone to fall from my chosen height (2.5m) to the ground.

I will repeat the experiment 3 times. I did a preliminary experiment to decide how many repeats are necessary these are my results:

To make my investigation fair I will control the following factors:

I found it difficult to time the cones falling this was because I hade to start and stop the stop watch at exactly the right moment and if I did this wrong I would also get a wrong set of results to make it easier to time the cone falling I could use more advanced equipment e.g. speedometer.