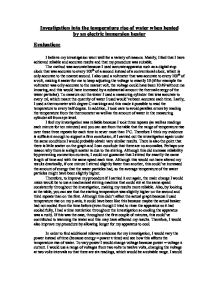 Investigation into the temperature rise of water when heated by an electric immersion heater (evaluation).

Investigation into the temperature rise of water when heated by an electric immersion heater Evaluation: I believe my investigation went well for a variety of reasons. Mainly, I feel that I have achieved reliable and accurate results and that my procedure was suitable. The method was accurate because I used accurate apparatus such as a digital stop clock that was accurate to every 100th of a second instead of a conventional clock, which is only accurate to the nearest second. I also used a voltmeter that was accurate to every 100th of a volt, making it easier for me to keep adjusting the voltage to exactly 10 (if for example the voltmeter was only accurate to the nearest volt, the voltage could have been 10.49 without me knowing, and this would have increased by a substantial amount the thermal energy of the water particles). To measure out the water I used a measuring cylinder that was accurate to every ml, which meant the quantity of water I used would've been accurate each time. ...read more.

Although this would not have altered my results drastically, if one minute I stirred slightly faster than another, this could've increased the amount of energy that the water particles had, so the average temperature of the water particles might have been slightly higher. Therefore, to improve my procedure if I carried it out again, the main change I would make would be to use a mechanical stirring machine that could stir at the same speed consistently throughout the investigation, making my results more reliable. Also, by looking at the table, you can see that the starting temperature was slightly higher on the second and third repeats than on the first. Although this didn't affect the actual graph because I used temperature rise on my y-axis, it could have been like this because maybe the actual beaker had not cooled from the time before (even though I tried to rinse the apparatus so it had cooled fully, I had a time restriction throughout the investigation so cooling the apparatus was a rush). ...read more.

the same. I would also keep the time variable constant at seven minutes (I feel this is suitable because it should be long enough to see a substantial change in temperature even at low voltages). To prevent convection currents I would use a mechanical stirring machine that would stir at thirty second intervals at a consistent speed (more reliable than stirring by hand) as well as the same apparatus as with the investigation I have just done (electric immersion heater, beaker, clamp stand, digital voltmeter, digital stop-clock, ammeter, power supply, heat resistant mat, thermometer with degree C markings, five wires, boss and 100ml measuring cylinder). I predict that if I carried out this investigation, I would obtain the same 'S' shaped curve because at first the electric heater itself would be heating up; then there would be a linear relationship (as the voltage increased, the power would increase so the energy would increase i.e. the water particles would be warmer); then lastly, the graph will begin to curve if the temperatures are high enough due to methods of heat loss. ...read more.