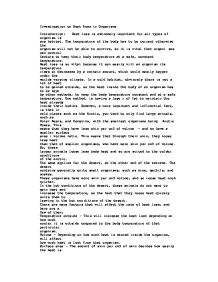 Investigation on Heat Loss in Organisms.

Investigation on Heat Loss in Organisms Introduction: Heat loss is extremely important for all types of organism is any habitat. The temperature of the body has to be correct otherwise the organism will not be able to survive, so it is vital that organisms can control factors to keep their body temperature at a safe, constant temperature. Heat loss is so vital because it can easily kill an organism its temperature rises or decreases by a certain amount, which could easily happen under the worlds varying climate. In a cold habitat, obviously there is not a lot of heat to be gained outside, so the heat inside the body of an organism has to be kept by other methods, to keep the body temperature constant and at a safe temperature. One method, is having a layer of fat to maintain the heat already inside their bodies. However, a more important and influential fact, is that in cold places such as the Arctic, you tend to only find large animals, such as Polar Bears, and Penguins, with the smallest organisms being Arctic Foxes. ...read more.

Volume - Depending on how much heat is stored inside the organism, will affect how much heat is lost from that organism. Surface area - The amount of skin per cm3 of skin decides how easily the heat is lost from the organism - the greater the amount of skin per cm3 of skin, the easier the heat loss for that organism. Aim: In this investigation, I will be investigating the heat loss of a certain volume of water inside a test tube. Here is a table of all the variable and how I will control them: Variable Method of Control Independent Variable Volume The water in all test tubes shall be measured accurately in a measuring cylinder before being placed inside the test tube. Dependant Variable Heat Loss Measured every minute using a stopwatch to take accurate measurements. Controlled Variables Surface Area Starting Temperature Room Temperature All test tubes will be the same size, and the water in every test tube will start at a certain temperature to give the water in each test tube time to settle inside the test tube, which will all be placed inside the same room. ...read more.

When the temperature of the water lowered to 70 oC, the stopwatch was started, and the experiment for that test tube had begun. Every thirty seconds, the temperature of the water was recorded, until the experiment had been running for 10 minutes, when the final temperature was recorded. This was repeated for the water inside the other five test tubes, so that the six volumes of water inside the test tubes were 10, 15, 20, 25, 30, and 35cm3, with the stopwatch starting when they lowered 70 oC, and the temperature recorded every thirty seconds for ten minutes. All the experiments were done inside the same room, so that the room temperature remained the same for all experiments, and the measuring cylinder was used to measure out exactly the correct volume of water for each test tube. The final results were recorded, and the equipment was packed away. Apparatus used: Here is a list of all the apparatus used in this investigation: Six, equally sized boiling tubes A thermometer Test tube rack Kettle ( to boil the water ) A stopwatch A measuring cylinder ...read more.