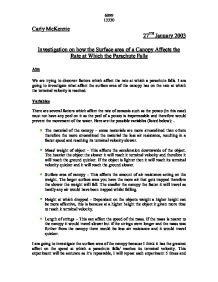 Investigation on how the Surface area of a Canopy Affects the Rate at Which the Parachute Falls.

There are several factors which affect the rate of osmosis such as the potato (in this case) must not have any peel on it as the peel of a potato is impermeable and therefore would prevent the movement of the water. Here are the possible variables (listed below): -

For this investigation I will need the following list of equipment:-

Drop each parachute and time it with the stop watch until it falls to the ground, record the time and repeat 5 times. Record all results in a suitable table and calculate an average for each set.

My results were over a suitable range, if I was to extend this particular experiment I would add extra parachutes such as 75cm2, 85cm2 and 95cm2 to see whether the pattern continues.