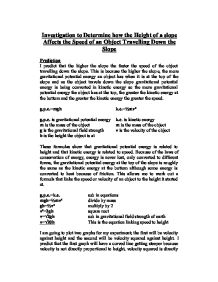 h is the height the object is at

These formulas show that gravitational potential energy is related to height and that kinetic energy is related to speed. Because of the laws of conservation of energy, energy is never lost, only converted to different forms, the gravitational potential energy at the top of the slope is roughly the same as the kinetic energy at the bottom although some energy is converted to heat because of friction. This allows me to work out a formula that links the speed or velocity of an object to the height it started at.

v=√20hThis is the equation linking speed to height

The speeds we record should be slightly lower due to friction

To keep the experiment accurate we will use a barrier to help us to know when the marble has reached the end of the run-off distance and eliminate as much human error as possible. To keep the marble rolling in a straight line we will use a drainpipe cut in half because it has raised walls. Every time we change the height of the slope we will also re-measure the length of the run-off distance because as the slope is raised the end of it gets further away from the barrier.

To make it as fair a test as possible I will use the same marble as the other marbles may have a different mass which will give them more gravitational potential energy and more kinetic energy, making them faster than a lighter marble. Also I will use the same length slope as if it is a longer slope, although it won’t have more gravitational potential energy than a shorter slope, it will be in contact with the slope more which means it will be affected by friction more and slow down.

The main thing that altered the accuracy of both experiments was friction, so, to improve my method I would try and remove friction as much as possible by using a lubricant on the slope. I would use the trolley and light gate again because with a few improvements to the method it would b a lot more accurate than using a run-off distance and stopwatch because it should remove a lot of human error. I think that there was a problem in the experiment I did with the light gate because of the accuracy of the length of the piece of card, so, this time, after I have cut the card I will measure its length again in case when it was cut out it got larger or smaller than 10cm. The length I re-measure it as is the length I will use for my calculations because this will make them more accurate. The other problem with the light gate was the method of keeping the trolley travelling in a straight line, we had to use two parallel rulers which the trolley kept hitting, adding friction and slowing it down. So as well as lubricating slope I would lubricate the rulers to reduce friction there. I would keep the rest of the apparatus the same.