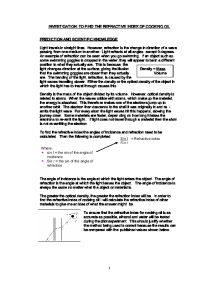 INVESTIGATION: TO FIND THE REFRACTIVE INDEX OF COOKING OIL

Light travels in straight lines.  However, refraction is the change in direction of a wave passing from one medium to another.  Light refracts at all angles except 0 degrees.

An example of refraction can be seen when you go swimming.  If an object such as some swimming goggles is dropped in the water, they will appear to be in a different position to what they actually are.  This is because the light changes direction at the surface, giving the illusion that the swimming goggles are closer than they actually are.  The bending of the light, refraction, is caused by the light waves travelling slower.  Either the density or the optical density of the object in which the light has to travel through causes this.

Density is the mass of the object divided by its volume.  However, optical density is related to atoms.  When the waves collide with atoms, which make up the material, the energy is absorbed.  This therefore makes one of the electrons jump up to another orbit.  The electron then descends to the shell it was originally in and re-emits the light wave.  For every atom the light waves hit this happens, slowing the journey down.  Some materials are faster, depending on how long it takes the electrons to re-emit the light..  If light does not travel through a material then the atom is not re-emitting the electron.

To find the refractive index the angles of incidence and refraction need to be calculated.  Then the following is completed:

The angle of incidence is the angle at which the light enters the object.

The refractive index will be calculated for each angle by doing Sin I divided by sin r. 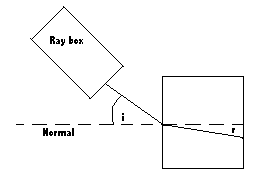 I will repeat the same steps for ethanol and water.  Fill the plastic tray with a suitable amount of ethanol, which will be equal to the amount of water, which will be tested later.  The tray can then be placed on the outline, which has been drawn on the paper.As with the plastic tray, each angle of incidence and refraction will be calculated.  This will allow the refractive index to be worked out; by doing sin I divided by sin r.

I therefore conclude that the method for this part of the pilot experiment was accurate, as the refractive index for water is the same as the published set of results.  Both the results and the graph show that the results were fairly accurate as there is only one anomalous result.

I therefore predict that the refractive index of cooking oil will be approximately 1.40.

In conclusion, the light wave photons raised the energy level, when absorbed by the atom.  Light is made up of photons, some are immediately released and others take a longer duration of time to be released.  Not every photon is absorbed by the atom.  The natural qualities of each individual substance, causes the time taken for the electron to descend to its original shell to differ.  The light is remitted more slowly in cooking oil than when compared to water and this is why the refractive index is higher.

All three graphs that were produced showed that the results were not random, but directly proportional to each other.  Using the graph was a better way to gain the results than by using the table, as when the gradient is calculated, the anomalous results were not included in the average.  This therefore means that the anomalous results will not affect the refractive index for each substance.

This is a well detailed report that has a good structure.
1. The background information section is well researched.
2. The preliminary test is performed well.
3. The table of results is well presented.
4. The conclusion is very detailed.
5. The report is missing an evaluation.
**** (4 stars)