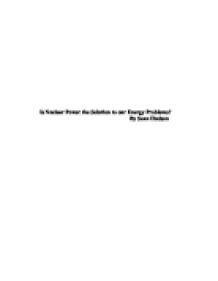 'Is Nuclear Power the Solution to our Energy Problems?' Case Study

In the following case study I will study and discuss the benefits and dangers of nuclear power, provide evidence through use of sources and finally end with a balanced conclusion summarising both the case study and my own opinions.

This case study will be viewed by other year 11 students so in order to match my target audience I have used various presentational devices including a range of font types, pictures and diagrams. 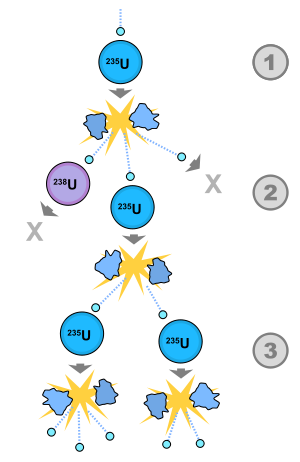 Nuclear fission takes place when radioactive atoms are made so unstable that they split in two releasing large amounts of energy. Nuclear power is the use of sustained nuclear fission to generate heat and electricity.Nuclear power plants provide about 6% of the world's energy and 13–14% of the world's electricity. There are currently over 440 commercial nuclear reactors in the world, operating in 30 different countries.

Nuclear power commonly uses an isotope of uranium, U-235. This is the only isotope of any element that can sustain chain reactions which occurs naturally. Uranium is quite common, it occurs in most rocks

An article from Springer.com

"nuclear power technologies can produce large amounts of energy from small amounts of fuel, while emitting very low amounts of greenhouse gases. They reduce countries' reliance on fossil fuel for their energy provision."

This source compares the cost of three low carbon technologies, offshore wind, gas with carbon capture and nuclear and ranks nuclear as the cheapest option.

Nuclear waste is also a problem as shown in source 4, "nuclear power produces radioactive waste that remains dangerous for tens of thousands of years."  However new technologies such as breeder reactors and thorium reactors could make nuclear waste less of a problem, and use less uranium fuel.

Overall after extensive research into the nuclear power, I have concluded that cloning could be a convenient solution to our energy problems as long as safety precautions are set. I believe that the best option is to use other forms of renewable energy as well nuclear so that we don't completely rely on nuclear power but use nuclear as our primary source of energy.

This is a well researched report that has an interesting approach to presenting information taken from sources.
1. The structure is good and flows well.
2. The discussion of the reliability of the sources is done well.
3. The conclusion is good, although it makes some large claims.
4. The reference section should use either the Harvard or Oxford system.
**** (4 stars)