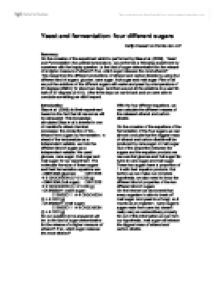 Is the kind of sugar determinative for the release of a higher measure of ethanol? If so, which sugar releases the most ethanol?

Yeast and fermentation: four different sugars Karlijn Hasaart en Esm�e de Looff Summary On the occasion of the experiment which is performed by Slaa et al. (2009); Yeast and Fermentation: the optimal temperature, we performed a following experiment by ourselves with the inquiry question: Is the kind of sugar determinative for the release of a higher measure of ethanol? If so, which sugar releases the most ethanol? We researched the different productions of ethanol and carbon dioxide by using four different kind of sugars; glucose, cane sugar, fruit sugar and malt sugar. First of all we put the solutions of the different sugars with water and yeast by a temperature of 25 degrees (298 K) for about two days. And then we put all the solutions in a warmth bath of 37 degrees (310 K). After three days we came back and we were able to conclude something we didn't expect. Introduction Slaa et al. (2009) did their experiment based on the fact that oil resources will be exhausted. This knowledge stimulated Slaa et al.'s interest in one of mankind's oldest chemical processes: the production of bio-ethanol from sugars by fermentation. In stead of the temperature as a independent variable, we took the different kind of sugars as a independent variable. ...read more.

We used a measuring cylinder because it is the most accurate way of measuring. Now the solution was made, we needed the yeast to complete the experimental solution. We took for each conic flask 1,5 gram yeast and we added the yeast to the solution. Then we weighed the conic flasks with the sugar-solution and the yeast. Apart from the fermentation experiment, we weighed an extra conic flask, and filled it with also 100 mL (weighed) demiwater to calculate the evaporated H2O. Because in the sugar-solutions the added demiwater can also be evaporated. This whole trial is done twice because we do a duplicate determination to be sure the data is reliable. After we make the solutions, we put the conic flasks by a temperature of 25 degrees (298 K) for about two days. We did this because we wanted to check Slaa et al.'s data. When we came back after two days we found out their data is reliable because the yeast cells didn't ferment at all. After we found out, we put all the conic flasks in a warmth bath of 37 degrees for three days. At last, when we get all the conic flasks out of the warmth bath, we weighed them again. ...read more.

So during the fermentation, glucose was able to produce a lot of ethanol. The average weight of the produced ethanol is 12,39 gram. On the occasion of this conclusion, we can say that our hypothesis is wrong. We thought that malt sugar would release the most ethanol with it's fermentation. But we didn't notice that it's possible that the syrupy malt sugar contains components with inhibitory function. Evaluation The experiment expired very well, we kept every conic flasks with the solution under the same circumstances during the whole experiment. So the variables were kept the same the whole time. Only the kind of sugar was changed; out independent variable to inquire if the kind of sugar is determinative to the mass of the released ethanol. Everything was easy to retrieve and kept at a safe place. So the set up was suitable enough to achieve the answer to our inquiry question. An improvement can be that we heat the sugars to their boiling point, and liquefy the sugar and the water under a high temperature; the boiling point. The boiling point is different for every sugar so the sugar will be heated to it's own boiling point to make the solution with water. There is a chance that the released ethanol will be different from the released ethanol when the sugar isn't warmed. So that could be the customized independent variable. ...read more.