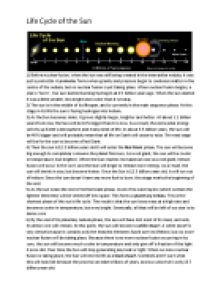 Lifecycle of a Sun

Life Cycle of the Sun

1) Before nuclear fusion, when the sun was still being created in the interstellar nebula, it was just a protostar. A protostar forms when gravity and pressure begin to condense matter in the centre of the nebula, but no nuclear fusion is yet taking place. When nuclear fusion begins, a star is "born". Our sun started burning hydrogen at 4.5 billion years ago. When the sun started it was a little smaller, less bright and cooler than it is today.
2) The

4) Then the sun is 12.2 billion years old it will enter the Red Giant phase. The sun will become big enough to completely consume the planet Mercury. As a red giant, the sun will be cooler in temperature, but brighter. When the Sun reaches its maximum size as a red giant, helium fusion will occur in the core, and the star will begin to release more energy. As a result, the sun will shrink in size, but become hotter. Once the Sun is 12.3 billion years old, it will run out of helium. Since the sun doesn't have any more fuel to burn, this stage marks the beginning of the end.
5)
...read more.