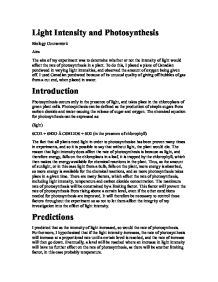 Light Intensity and Photosynthesis Biology Coursework Aim The aim of my experiment was to determine whether or not the intensity of light would affect the rate of photosynthesis in a plant. To do this, I placed a piece of Canadian pondweed in varying light intensities, and observed the amount of oxygen being given off. I used Canadian pondweed because of its unusual quality of giving off bubbles of gas from a cut end, when placed in water. Introduction Photosynthesis occurs only in the presence of light, and takes place in the chloroplasts of green plant cells. Photosynthesis can be defined as the production of simple sugars from carbon dioxide and water causing the release of sugar and oxygen. The chemical equation for photosynthesis can be expressed as: (light) 6CO2 + 6H2O � C6H12O6 + 6O2 (in the presence of chlorophyll) The fact that all plants need light in order to photosynthesise has been proven many times in experiments, and so it is possible to say that without light, the plant would die. The reason that light intensity does affect the rate of photosynthesis is because as light, and therefore energy, falls on the chloroplasts in a leaf, it is trapped by the chlorophyll, which then makes the energy available for chemical reactions in the plant. Thus, as the amount of sunlight, or in this case light from a bulb, falls on the plant, more energy is absorbed, so more energy is available for the chemical reactions, and so more photosynthesis takes place in a given time. There are many factors, which affect the rate of photosynthesis, including light intensity, temperature and carbon dioxide concentration. The maximum rate of photosynthesis will be constrained by a limiting factor. ...read more.

Overall, this is a very competent piece of work which investigates the effect of light intensity on the rate of photosynthesis. The writer has produced a concise and well-written account of the investigation with most aspects of a GCSE practical report covered in sufficient detail to gain the higher grades. Preliminary work was effectively used to establish the best method, and the results collected were analysed in some detail.

The report would benefit, however, from the following improvements:

[1] Reference in the introduction to previous work carried out by other students. There is a great deal of this online. This would have enabled the student to make detailed predictions.

[2] A risk assessment was missing and is now a vital part of every report.

[3] A more detailed quantitative analysis of the results was needed to enable the reader to fully understand the relationship between the IV and DV. Comparisons of the data collected here with that collected by other students would also prove useful in measuring the reliability of this work.

Overall, however, a good effort which, with small improvements, would have gained 5 stars.