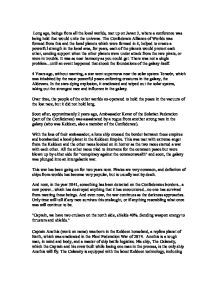 Long ago, beings from all the local worlds, met up on Javan 3 (a story)

Long ago, beings from all the local worlds, met up on Javan 3, where a conference was being held that would unite the universe. The Confederate Alliance of Worlds was formed from this and the local planets which were formed in it, helped to create a powerful strength in the local area, for years, each of the planets would protect each other, sending support when the other planets were under attack from the rare pirate, or were in trouble. It was as near harmony as you could get. There was not a single problem...until an event happened that shook the foundations of the galaxy itself.

4 Years ago, without warning, a star went supernova near the solar system Teracór, which was inhabited by the most powerful peace-enforcing creatures in the galaxy, the Aldevans. In the stars dying explosion, it eradicated and wiped out the solar system, taking out the strongest race and influence in the galaxy.

Over time, the people of the other worlds co-operated to hold the peace in the vacuum of the lost race, but it did not hold long.

Alex, or Alexander James Vaughan to use his full name, was brought up by the female goddesses of Punar 7. He doesn’t know much about his childhood or his parents, all he does know is that his father was the founder of the Hamester Peace Corps, which is now under Administration due to a lack of funding. His main reason for joining Captain Anethis is to find out more about his childhood and his parents. His dreams torment him, he longs for his mother as with any child, but Alex lusts for his mother although he has never seen her, whenever he thinks about her, his heart pummels against his chest as would a young boys’ heart would while looking at some sleazy picture on the internet. He doesn’t know why he has these feelings; his goal is too stop them. Nightly his father torments him, he can hear screams of a young woman, calling for his help. Alex tries to run towards the screams, searching in the darkness.

A gunshot and it’s all over, Alex wakes in a pool of his own sweat, his heart smashing against his chest, before he bursts into tears.

“Sir, you can trust him he’s Kian. We will go and get the supplies, we will meet you back at the ship”

“OK Nicole, ill be back at ship in a few hours, I think ill have a look around before we leave as well.”

Spit flew from the Captain’s mouth. “I DON’T GIVE A FLYING WATSIT ABOUT GALAXIAN, I’LL BE BACK IN A FEW HOURS! NOW GO!”

The Captain stormed off with the green creature, muttering to himself as he went. Their faces covered in spit, Nicole, Neil and Alex went in search of supplies, and they knew not to argue with the Captain.

“So, Mr. Cyclops…why was it you wanted to speak to me? Alone at that”

“Captain Anethis, Anethis will be just fine.” The Room Mr. Cyclops had taken him to was draped in black curtains. The floor was black, the table which Mr. Cyclops was sitting at was made with a black oak. The only source of light was coming from the lamp on the table. A Dison  lamp illuminator 250 the Captain noted.