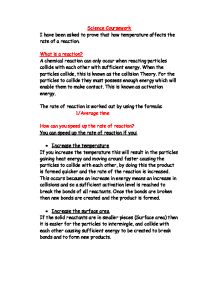 Look at your new

Science Coursework I have been asked to prove that how temperature affects the rate of a reaction. What is a reaction? A chemical reaction can only occur when reacting particles collide with each other with sufficient energy. When the particles collide, this is known as the collision Theory. For the particles to collide they must possess enough energy which will enable them to make contact. This is known as activation energy. The rate of reaction is worked out by using the formula: 1/Average time How can you speed up the rate of reaction? You can speed up the rate of reaction if you: * Increase the temperature If you increase the temperature this will result in the particles gaining heat energy and moving around faster causing the particles to collide with each other, by doing this the product is formed quicker and the rate of the reaction is increased. This occurs because an increase in energy means an increase in collisions and so a sufficient activation level is reached to break the bonds of all reactants. Once the bonds are broken then new bonds are created and the product is formed. * Increase the surface area If the solid reactants are in smaller pieces (Surface area) then it is easier for the particles to intermingle, and collide with each other causing sufficient energy to be created to break bonds and to form new products. ...read more.

In graph two one of my results falls greatly away from the line of best fit. This is due to Human error. This may be because when I was trying to reach the temperature of 30 C, by heating the Sodium thiosulphate over the Bunsen burner, when I took it off the sodium thiosulphate cooled down slightly causing me to get a slightly lower temperature then 30 C. I tried to overcome Human error by repeating the experiment and obtaining the average. I also used a burette and pipette for accuracy, instead of a measuring cylinder. My results do agree with my prediction, which was when the temperature of Sodium thiosulphate was increased Sulphur would be formed quicker. The particles were not colliding faster at 25 C compared to 50 C. This tells me that as the temperature increases the time taken for the x to disappear decreases. This is because the reacting particles gain energy (activation energy) and move faster. As the particles move faster there are more collisions (collision theory), since the collisions are more energetic, the rate of reaction will be affected causing the rate of reaction to increase. I could further improve the Experiment if I was too use the proper and more accurate equipment e.g. A light gate, because it sees either Black or white, this would help when being able to know if the X had disappeared. ...read more.