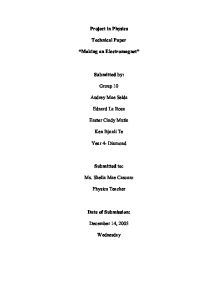 This was done in order to make more coiled wire attached in the nail. Then, with this kind of structure, the group was able to conclude that the electromagnetic nail is a success since it was able to attract the desired number of staple wires. G. Recommendations: After inventing the electromagnet, the proponents would like to recommend a few practices for better project making in the future. The group found this activity fun and worthwhile doing because a lot of scientific concepts were applied and it was amazing to see how the group's invention actually worked. The group highly recommends this kind of project for it is such a learning experience. The group suggests that the more turns of wire your magnet has, the better and that the further the wire is from the core, the less effective it will be. The more current that passes through the wire, the better as well. But too much current can be dangerous, though. As electricity passes through a wire, some energy is lost as heat. The more current that flows through a wire, the more heat is generated. Things can quickly become too hot to handle. The proponents recommend others to try experimenting with different cores. A thicker core might make a more powerful magnet. ...read more.

A group piece of coursework. Response to the aim was done quite well but as they achieved all their aims through the experiment, but I'm not sure they recognised all the principles behind electromagnetism so should look at this more ...

A group piece of coursework. Response to the aim was done quite well but as they achieved all their aims through the experiment, but I'm not sure they recognised all the principles behind electromagnetism so should look at this more thoroughly in their own time as some of their explanations were not explained very well in relation to the scientific evidence.

The group includes pictures of the different materials so the reader can gain an idea of what the magnets may be like. The method is clear to read but to make it easier to read and follow it should have been presented in bullet point form with clearer instructions on how to strip and connect the wire. It would have been helpful to include a diagram of stages here. The science behind the electromagnet is explained well. The different experiments used seemed a bit random and the results were not well documented. The theory behind each change was only slightly explained and should be explained a bit more thoroughly such as to include exactly why they gained the decision for each change. For example, why did they use thinner and longer copper wire, what was the reasoning behind it. The conclusion is adequate and improvements are suggested but again the reasoning behind it is not very well explained.

Presented well in different clear subheadings. Grammar, spelling and punctuation are all to a good level.