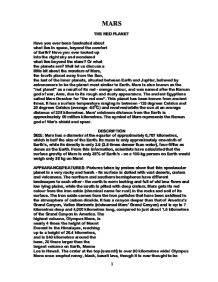 Have you ever been fascinated about

what lies in space, beyond the comfort

of Earth? Have you ever looked up

into the night sky and wondered

what lies beyond the stars? Or what

the planets are? Well let us discuss a

little bit about the wonders of Mars,

the fourth planet away from the Sun,

the last of the inner planets, situated between Earth and Jupiter, believed by astronomers to be the planet most similar to Earth. Mars is also known as the "red planet" as a result of its red - orange colour, and was named after the Roman god of war, Ares, due to its rough and dusty appearance. The ancient Egyptians called Mars Descher for “the red one”. This planet has been known from ancient times. It has a surface temperature ranging in between -125degrees Celsius and 25 degrees Celsius (average -55OC) and revolves/orbits the sun at an average distance of 228 kilometres. Mars' minimum distance from the Earth is approximately 56 million kilometres. The symbol of Mars represents the Roman god of War's shield and spear.

SIZE: Mars has a diameter at the equator of approximately 6,787 kilometres, which is half the size of the Earth. Its mass is only approximately one-ninth of Earth's, while its density is only 3.9 (3.9 times denser than water), four-fifths as dense as the Earth. From this information, scientists have calculated that the surface gravity of Mars is only 38% of Earth's - so a 100-kg person on Earth would weigh only 38 kg on Mars!

APPEARANCE/FEATURES: Pictures taken by probes show that this spectacular planet is a very rocky and harsh - its surface is dotted with vast deserts, craters and volcanoes.

MARINER 3: On November the 5th, 1964, NASA launched the Mariner 3, though a shell covering the spacecraft failed to come off in space, hence none of its instruments could work and unfortunately it missed its destination by a great distance.

MARINER 4: However, NASA was still determined. By November the 28th, 1964 they had prepared another craft – the Mariner 4, which actually was due to be launched a few days after Mariner 3, but its launch was postponed due to the shell problem, so that engineers could design a new type of shell. It was wonderfully successful – the 264.5 kg (575 pounds) spacecraft consisting of 138,000 pieces, to which solar panels were attached, carried eight scientific instruments and was sent to study the planet’s radiation and magnetic field. One of the instruments was a television camera that would take the first close up pictures of Mars. The 21 and a half pictures taken with primitive technology, at a distance of 6118 miles (approximately 9788 kilometres) during the Mariner 4’s encounter with Mars, weren’t very clear compared to pictures taken by later probes, though were at least fifty times clearer than images via a telescope on Earth. A photograph took up to eight hours to transmit, at a rate of only 8.3 bits per second!

MARINERS 6 AND 7: Later in February and March of 1969, Mariners 6 and 7 were launched. (Mariner 5 was bound for Venus). Both weighed 900 pounds (414 kg) and carried expanded scientific instruments and greatly improved data - transmission capabilities, a maximum capacity of 16,200 bits per second. Their purpose was to examine the Martian surface condition and gather evidence as to whether life on Mars actually existed. Mariner 6 and 7 also featured advanced television systems – a single photograph would contain 3.9 million bits of data, compared to just 250,000 in a Mariner 4 picture.

Mars is an astonishing planet, a land

filled with secrets we have not yet

discovered. However one day, we

may be able to know much more

about it, and spacecraft journeys

services. Perhaps a long time ago,

liquid water existed on Mars, but it all evaporated into space? We may just be an insignificant corner of the universe, or the only unique, hospitable place where life exists. To us, the universe is immeasurable, as we are just beginning to discover its wonderful secrets and exploring the planet most similar to Earth...