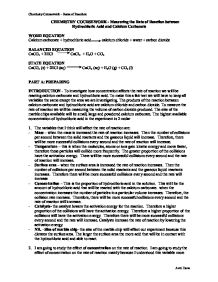 Measuring the Rate of Reaction between Hydrochloric Acid and Calcium Carbonate

- I will put the small chips in the conical flask, and I will begin to swirl the flask. - I have to make sure I swirl it at a rate I can copy during the next experiment - As soon as I put the chips into the solution, I will start the stop clock. - From then on, every 10 seconds I will note down how much carbon dioxide has been given off. - This will be done until a) all the small chips have been dissolved or b) the gas syringe reaches 100cm� of carbon dioxide before it has all dissolved. - I will repeat the experiment twice, with the same amount of acid and water. - I will repeat this experiment with the different concentrations, each three times. I will make it a fair test by making sure that I shake the conical flask at the same speed each time. Next, I will make sure that I measure all the hydrochloric acid and calcium carbonate small chips accurately. I will also make sure that I read the values on the gas syringe accurately, so that the graphs that I eventually draw up will be accurate. I am also going to make sure that I use to correct equipment, for example if I want to measure 20cm3 of hydrochloric acid I will not use a 50cm3 measuring cylinder, I will use a 25cm3 cylinder instead. This will ensure that the substances I measure out will be accurate. I will also make it a fair test by making sure that when I read the gas syringe for my results I am accurate, as it could ultimately affect my graphs. I have also decided, based on preliminary tests that I will only take measurements of CO2 for 150 seconds. This is because with some values it could take very long for the calcium carbonate and hydrochloric acid to react. ...read more.

A burette may have also been a good idea, as it is easier to take readings from this. It is also a lot more accurate to measure the amount of gas given off. In addition, other things that I would like to investigate would be the experiment of time against amount of gas produced to show at which points the rate of reaction was at best and the curve/line of reaction. I would like to also investigate other factors, which affect the rate of a reaction like temperature and surface area to see how they affect the rate of a reaction. Some other areas in the experiment that I feel I could have improved on were factors like, controlling the stopwatch. There is lots of room for human error here. However, the inaccuracies due to them were negligible because I paid close attention to these during the experiment. The results show that as the concentration of acid decreases, the time take for the reaction increases. As th time increases the rate of reaction decreases. The reason why the rate decreases as the concentration increases is that the number of H+ ions n the acid decreases as the concentration decreases. Therefore there are fewer collisions every seconds between the H+ ions and the Ca+ ions. Therefore there will be fewer successful collision and the rate of reaction will lower. I that my prediction was proved. The reacting particles did collide with sufficient energy, as if they did not, no reaction would have occurred at all. The particles must have had the activation energy as without it no reaction will occur. Evidently one did otherwise I would not have obtained such results. The concentration of hydrochloric acid did increase the rate of reaction. The rate of reaction did increase because there were more H+ ions in the same volume of acid. Twice as many collisions must have occurred between 40cm3 of acid and no water compared to 30cm3 of water and 10 of acid. Chemistry Coursework - Rates of Reaction Avni Dave ...read more.