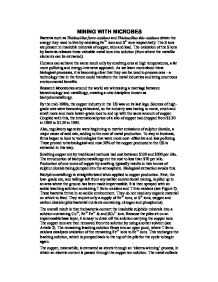 MINING WITH MICROBES Bacteria such as Thiobacillus ferro-oxidans and Thiobacillus thio-oxidans obtain the energy they need to live by oxidising Fe2+ ions and S2- ions respectively. The S ions are present in insoluble minerals of copper, zinc and lead. The oxidation of the S ions by bacteria releases these valuable metal ions into solution (from where the metallic elements can be extracted). Humans can achieve the same result only by smelting ores at high temperatures, a far more polluting and energy-intensive approach. As we learn more about these biological processes, it is becoming clear that they can be used to process ores - a technology that in the future could transform the metal industries and bring enormous environmental benefits. Research laboratories around the world are witnessing a marriage between biotechnology and metallurgy, creating a new discipline known as biohydrometallurgy. By the mid-1980s, the copper industry in the US was on its last legs. Sources of high- grade ores were becoming exhausted, so the industry was having to move, crush and smelt more and more lower-grade rock to end up with the same amount of copper. Coupled with this, the international price of a kilo of copper had dropped from $3.20 in 1980 to $1.30 in 1985. Also, regulatory agencies were beginning to restrict emissions of sulphur dioxide, a major cause of acid rain, adding to the cost of metal production. To stay in business, firms began to look to technologies that were more cost- effective and less polluting. These proved to be biological and now 30% of the copper produced in the US is extracted in this way. Smelting copper ore by traditional methods had cost between $130 and $200 per kilo. ...read more.

The process in Equation 1 can be reversed by mixing the organic solution with a small volume of concentrated acid. This pushes Cu2+ ions back into the aqueous solution containing the acid and a further increase in concentration of Cu2+ ions is achieved. The two processes, the extraction of Cu2+ ions into the organic solvent and then back into the aqueous phase, both depend on pH (i.e. depend on the concentration of H+ ions in solution). A GOLDEN OPPORTUNITY Jack Barrett and Martin Hughes describe how the reorganisation of London University led to a new full-scale commercial process for extracting gold. 'There's gold in them thar hills' - and plenty of volunteers to help dig for it! Few people strike it lucky, however; more fortunes were lost than were ever won in the famous 19th century gold rushes of California, Ballarat and the Klondike. Gold mining today may not be quite so frenetic but it is still a risky business. Even after finding reliable deposits, extracting the gold from them is no mean feat. Between 15% and 30% of the world's gold reserves occur as refractory minerals - microscopic particles of gold encapsulated in a mineral matrix. Well known examples of such gold- containing minerals include arsenopyrite (FeAsS), iron pyrites (FeS2) and chalco pyrite (FeCuS2) The first stage in obtaining the gold is usually to use froth flotation to separate these refractory minerals from any unwanted oxide ores and non-metallic minerals present. This produces a sulphide concentrate, which is then roasted to liberate the gold. The gold is extracted by treating the resulting mixture with an aerated solution of sodium cyanide, a process called cyanidation. ...read more.

The mine operated as an open-cut until November 1992, when the accessible oxide layers became uneconomic. The deeper sulphide layers were only accessible by underground mining, which began in November 1993. The first sulphide ore, produced in June 1994, was tested at the BacTech laboratory pilot plant in Perth. The gold particles in the Youanmi deposits are mainly associated with arsenopyrite, and 90% oxidation of the arsenic together with 25% oxidation of the sulphur liberates at least 92% of the gold. The unrefined ore contains about 12g of gold per tonne. A typical concentrate contains 40 g to 65 g of gold per tonne, 2.5% to 3% arsenic and 28% to 32% sulphur. Good company Figure 2 shows the various stages of extraction at the Youanmi plant. In 1995, the plant produced over 1 tonne of gold and estimates that there is enough gold in the region to sustain production for at least seven years. The cost of running the plant is surprisingly low - roughly $30 per tonne of concentrate, including power, chemicals, maintenance and labour (only one person is needed per shift). One reason for this is the use of locally quarried calcrete (1 form of limestone found in cemented superficial gravel) to neutralise the effluent and the bacterially oxidised concentrate. The other reagents are bacterial nutrients containing nitrogen and phosphorus, mainly in the form of ammonium phosphate. The recovery of base metals during gold extraction is also high. Researchers at BacTech have recovered not less than 89% of copper, nickel, cobalt and zinc, all of which contributes to the profitability of plant operations. In fact, recent work has shown that bacterial recovery of the base metals alone, whether or not gold is present in the concentrate, is feasible and economically competitive with conventional processes. http://www.epa.gov/grtlakes/arcs/EPA-600-991-001/EPA-600-991-001.html http://www.ejbiotechnology.info/content/vol3/issue3/full/4/bip/ ...read more.