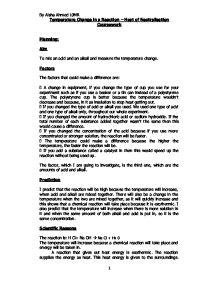 Mix an acid and an alkali and measure the temperature change.

Temperature Change in a Reaction - Heat of Neutralisation Coursework Planning: Aim To mix an acid and an alkali and measure the temperature change. Factors The factors that could make a difference are: ( A change in equipment, if you change the type of cup you use for your experiment such as if you use a beaker or a tin can instead of a polystyrene cup. The polystyrene cup is better because the temperature wouldn't decrease and because, in it as insulation to stop heat getting out. ( If you changed the type of acid or alkali you used. We used one type of acid and one type of alkali only, throughout our whole experiment. ( If you changed the amount of hydrochloric acid or sodium hydroxide. If the total number of each substance added together wasn't the same then this would cause a difference. ( If you changed the concentration of the acid because if you use more concentrated or stronger solution, the reaction will be faster. ( The temperature could make a difference because the higher the temperature, the faster the reaction will be. ( If you add a substance called a catalyst in then this would speed up the reaction without being used up. The factor, which I am going to investigate, is the third one, which are the amounts of acid and alkali. ...read more.

In our experiment there were results in the first experiment, which did not fit into the pattern. I think that we didn't wait long enough until the temperature had reached its highest. In the second experiment the volumes of acid, which didn't fit the pattern, were: 10, 20, 40 and 50 cm3. I didn't get perfect result for the first experiment because they weren't reliable and were higher than experiment 1. Although the line graph was perfect and had the best fit, the results were lower than the second experiment. Reliability When I repeated my experiment my results were not the same. Our first experiments results were 1 or 2� C lower than experiment two. I think that experiment two results were the best because they were accurate and reliable as the temperatures were higher. The two anomalous results could be lower than expected because of the following reasons: * I did not wait long enough for the thermometer to go to its highest. * I did not measure the acid or alkali accurately * I waited too long so the temperature had gone down again. * Doing a lot more experiments at in between volumes e.g. 15, 25, 35 cm3 etc. * Use accurate ways of measuring the volumes, such as a burette. Supports conclusion - both graphs are the same shape, so the evidence is good enough to support my conclusion that the most heat is produced when the acid and alkali are equal in volume. By Aisha Ahmed 10MR 1 ...read more.