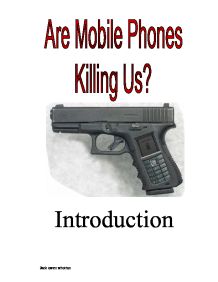 The argument for which I have based my case study on is an on going argument even in 2008. This argument which I have chosen is; mobile phones and their links to cancer of the brain and other forms of cancer which are believed to be caused by the on going bombardment of radio waves from mobile phones and their masts. This subject interests me due to its technological side of things and its 'flawless' health and safety regulations. The mobile phone its self is an every day necessity for the business and social world of today; many people have become dependable on such a small inquisitive device almost to say it was their only gateway to the outside world. Does using a mobile phone cause brain damage? Well mobiles cause micro waves...what are the effects of these? Well numerous tests have been done to try and find the effects of microwaves produced by mobile phones, but how can we say these are reliable? Here are both in vivo and in vitro results. In vitro non thermal effects of microwaves * Elicits epileptic activity in rat brain slices in conjunction with certain drugs. * Affects cell division of yeast and on the genome conformation of E. coli. * Synchronises cell division in yeast, S. carisbergenis. * Increases permeability of red blood cell membrane. * Affects calcium efflux in brain cells. ...read more.

They should look at the number of base stations and the intensity of radiation. To extend the reliability of the study even further scientists and experts could investigate all areas surrounding a base station to make sure their intensity levels aren't harming people of any ages. Results The main conclusion of the report is: The Expert Group believes that, on the basis of the evidence currently available, there is no need for the general population to be worried about the use of mobile phones. Taken on 24/02/2008 http://www.iegmp.org.uk/report/clarification.htm (4) Therefore the report suggests that users need not to worry about mobile phones, based on the evidence and analysed during the study. The main conclusion informs me that mobile phones do not cause brain damage. However the statement 'of the evidence currently available' suggests that in the near future more evidence can be found which may change the conclusion of the report. Including this information in the conclusion may cause worry within society. At first they may be re-assured that it is safe to use mobile phones, but the fact that vital evidence may still be left unfound can cause worries. People may worry that mobile phones are not safe to use but the evidence to prove this is still unknown. Precautionary Approach The report goes onto say that a precautionary approach should be taken when using mobile phones, as a small amount of evidence may do some biological harm. ...read more.

Within this report they link mobile phones to a break down of dna leading to cell death and brain cancer. However this test was done on rats, which is a totaly different object compared to the human body. However they have shown that hotspots within the brain can occur due to prolonged exposure to the radio frequency pulsating from a mobile phone and therefore they believe there hypothesis to be correct, 'mobile phones do cause cancer In conclusion, after reading these different reports I have seen a lot of evidence both for and against mobile phone use; and after analysing and concluding each account i have come to my own personal conclusion. I firmly believe the use of mobile phones on a regular basis does not cause any form of cancer, however others may think it does due to a slight heating change within the brain. I also add that I believe prolonged exposure to heavier more dangerous waves of energy might cause such injuries like headaches and migraines but nothing more I believe this because after reading my most reliable resource, the Stewart report I am convinced that there is no link what so ever to the break down of cells and henceforth no links to cancer. I can understand how others may believe differently due to the vast amount of unreliable resources out that say differently to my conclusion but I firmly believe that if they too read the Stewart report even they would be have peace of mind. ...read more.