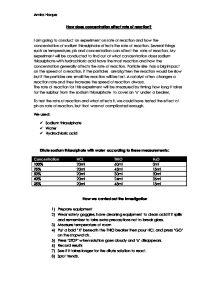 My experiment will be conducted to find out at what concentration does sodium thiosulphate with hydrochloric acid have the most reaction and how the concentration generally affects the rate of reaction.

Every time we washed the beaker there was water left in it. This could have diluted the THIO changing the accuracy of the results therefore we set up a system where we dried the beakers before using them for the final investigation. From the initial method results we can tell the more concentrated the THIO the faster the rate of reaction. This matches our prediction therefore seems to be accurate. The changes we made from the initial experience: * Keeping an eye on the temperature * introducing a new concentration * Decreasing the number of tries from 10 to 8. ( or else we would have time to replace outliers if we had any) * dedicated roles to each member then dried the beakers The Apparatus We used measuring cylinder to measure water, we used a 50ml one because we needed a maximum amount of water, of 36ml. It's easier to measure it with a smaller measuring cylinder because the scale is more detailed giving us precision in the amount we use. We used two 100ml capacity beakers to carry out our experiment because we would have mad 80ml maximum of solution in a beaker. Also the smaller the beaker the easier it is to see the 'X' sign if the beaker was bigger the 'X' becomes harder to see resulting in the member pressing the 'Stop' button on the stop watch later which would impact our result's precision. A Pasteur pipette was kept to measure the smaller amounts of water and THIO where 25ml and 36ml are necessary to be accurate. ...read more.

There are more collisions in a period of time which means there are more successful collisions. Increasing the concentration increases the number of particles in a given volume of solution, and so makes successful collisions more likely. If you keep increasing the concentration eventually it stops, because if there are enough HCl particles to collide with every THIO one; adding more will have a small or no change will occur. This explains what occurs at 100%, therefore there isn't a 100% difference between the 75% and 100% concentration. The trend shown is that as the input variable is decreased, concentration of sodium thiosulphate, the outcome variable increases; time taken for a reaction. Evaluating the data that you have collected In total, including the outliers, we collected 40 results which were sufficient to come to a conclusion. Most of the results were accurate however 3 of them were outliers and were excluded from the average. The results match my prediction and it has a negative correlation without any odd parts. There was no difficulty in drawing the line of best fit. This shows that my results are accurate. I think the three outliers should be repeated although this isn't particularly necessary because I had enough results to come to an average. My results have small error bars which show most of my results are accurate, but the 25% and 50% concentration are much bigger showing that these results could be replaced with more accurate ones. There were only minor issues with the results therefore I think it is sufficient to come to a conclusion. ?? ?? ?? ?? Amira Haque ...read more.

The candidate has carried out a thorough investigation into the effects of concentration on reaction rates. They have used the results of their well planned experiment to come to a justified conclusion. Within their report they have included a justified ...

The candidate has carried out a thorough investigation into the effects of concentration on reaction rates. They have used the results of their well planned experiment to come to a justified conclusion. Within their report they have included a justified hypothesis, analysis of results, and a conclusion and evaluation.

The candidate has shown very good analysis skills, as they have collected data from a wide range of concentrations, investigated one interval (50%-25%) in greater depth after noticing an unexpected drop in reaction rate, and discussed in depth why they came to their original hypothesis, and therefore why concentration affects the reaction rate. They have suggested that they used mathematical techniques to analyse their data -for example claiming three of their results were outliers, however to prove this they should have included their calculations in the report. However, they have clearly used maths to find the average rate of reaction within the intervals tested, and claim to have put error bars on their graph in order to investigate the accuracy of their results (unfortunately the graph has not been included). These advanced techniques for analysing data would have gained them top marks. One area where they could have marginally improved their analysis is by explaining in more detail why concentration, or the other variables mentioned, affect the reaction rate by referring to collision theory - a higher concentration of reacting particles means that there would be a higher frequency of collisions; a catalyst would provide an alternative route for the reaction with a lower activation enthalpy, so more colliding particles would have greater that the activation enthalpy, leading to a higher frequency of successful collisions; a higher temperature would increase the frequency of collisions as the particles are moving around faster, and increase the energy of colliding particles, so these collisions are more likely to be successful. A more thorough analysis of these variables may be important to gain marks.
Occasionally they gave excuses as to why they chose not to investigate a different variable, which is unnecessary as the examiner should be aware that you have limited equipment, time, and skills. Excuses such as '[pH] was not complicated enough' are definitely not going to gain you any extra marks! If you feel you have to justify not doing an alternative experiment, reference to classroom equipment would be more suitable.
Despite these small issues, their analysis of the data is very good and should have gained them high marks.

Their spelling, punctuation, and grammar are generally good throughout, with only minor errors. However, there is much room for improvement in the presentation of their report. Their method section should have contained a detailed, labelled diagram of the equipment, and several comments within it would have been better placed in a separate section on 'safety' or 'reducing uncertainties'. There are also odd, un-titled paragraphs discussing their hypothesis, changes made to the experiment after a preliminary experiment was carried out, and how they tried to reduce uncertainties in their measurements - all jumbled together. These should have been separated out and put under headings such as 'changes to the original experiment', 'reducing uncertainties' and 'hypothesis'. They have also neglected to include all their data - there is no data for (or real discussion of) their preliminary experiment, nor the raw data for their main experiment - only the averages are given. This information is vital in a real scientific report as it allows other scientists to analyse the data themselves to check the conclusions reached by the author, and so missing them out should have lost the candidate several marks.
However, they have tried to make their report easier to read by using bullet points and clear headings in bold font, which helps the reader (and the examiner) follow the experiment and find important sections quickly and easily.