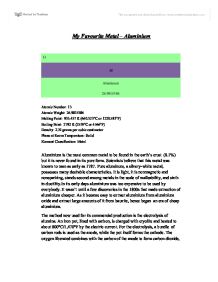 The method now used for its commercial production is the electrolysis of alumina. An iron pot, lined with carbon, is charged with cryolite and heated to about 800�C/1,470�F by the electric current. For the electrolysis, a bundle of carbon rods is used as the anode, while the pot itself forms the cathode. The oxygen liberated combines with the carbon of the anode to form carbon dioxide, while the aluminium falls to the bottom of the vessel. More alumina is added and the process continued, the molten metal being drawn off from time to time. ...read more.

A plastic form of aluminium, developed in 1976, which moulds to any shape and extends to several times its original length, has uses in electronics, automobiles, and building construction. Aluminium can be deposited on the surface of glass to make mirrors, where a thin layer of aluminum oxide quickly forms that acts as a protective coating. Aluminum oxide is also used to make synthetic rubies and sapphires for lasers. Aluminium oxide is used in the manufacture of refractory bricks and as an adsorption filter in chromatography. Aluminium hydroxide is used as a mordant in dyeing and aluminium chloride as a catalyst in organic reactions. Aluminium sulphate is the most widely used chemical in water treatment worldwide. Jash Choraria X C ...read more.

The response to the topic of aluminium is a basic one. It covers basic properties of the metal and the history and uses of the metal today. The essay is well rounded but lacks scientific depth beyond GCSE knowledge as ...

The response to the topic of aluminium is a basic one. It covers basic properties of the metal and the history and uses of the metal today. The essay is well rounded but lacks scientific depth beyond GCSE knowledge as it just appears as a bunch of facts that have been researched and bunched together. References are not included.

The candidate starts with a few basic properties of the metal but does not explain the significance of the melting or boiling point figures. This would show deeper scientific understanding. The candidate explains the history behind the metal and current uses. This should have been presented in a more concise format as the writing appears waffly at the current time. The uses of the metal are presented as a monotonous list and what would have been a better way would be to explain why the metal is used in this instance.

Spelling, grammar and punctuation appear fine. The pictures do not add to the essay as they are poor quality. The layout of the essay could be improved to be split into clear subheadings.