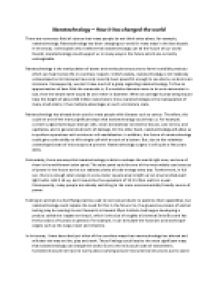 Nanotechnology. In this essay, I will explain why I believe that nanotechnology can be the future of our world

Therefore, this could be one of the many significant ways that nanotechnology could help us. For example, current surgical techniques disrupt cells, sever extracellular connective tissues, cuts nerves, and capillaries, and in general do all sorts of damage. On the other hand, nanotechnology will allow us to perform operations with minimum cell vandalization. In addition, the future of nanotechnology could give us the ability to kill a single cell with a touch of a button. But, due to the relatively undeveloped state of microscopes at present. Nanotechnology surgery is still quite a few years away. Fortunately, there are ways that nanotechnology is able to reshape the world right now, and one of them is the well-known solar panel. ...read more.

So, the gruesome process of animal testing may be nearing its end. Research at Howard Wyss Institute had begun developing a product called the ?organs-on-chops?, which is the size of roughly a Universal Serial Bus and has the functions of humans in general. For example, it can stimulate the functions and working of organs such as the lungs, heart and intestine. In this essay, I have described just a few of the countless ways that nanotechnology has altered and will alter the way we live, play and work. These findings could lead to the most significant ways that nanotechnology can change the world. Due to the minuscule scale of nanometers, humankind would not have to worry about carrying around monumental structures just to assist them with one aspect of life. Consequently, nanotechnology could be the future of our world. ...read more.