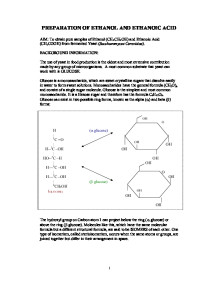 PREPARATION OF ETHANOL AND ETHANOIC ACID AIM: To obtain pure samples of Ethanol (CH3CH2OH) and Ethanoic Acid (CH3COOH) from fermented Yeast (Saccharomyces Cerevisiae). BACKGROUND INFORMATION: The use of yeast in food production is the oldest and most extensive contribution made by any group of microorganisms. A most common substrate that yeast can work with is GLUCOSE. Glucose is a monosaccharide, which are sweet crystalline sugars that dissolve easily in water to form sweet solutions. Monosaccharides have the general formula (CH2O)n and consist of a single sugar molecule. Glucose is the simplest and most common monosaccharide. It is a Hexose sugar and therefore has the formula C6H12O6. Glucose can exist in two possible ring forms, known as the alpha (?) and beta (?) forms: The hydroxyl group on Carbon atom 1 can project below the ring (? glucose) or above the ring (? glucose). Molecules like this, which have the same molecular formula but a different structural formula, are said to be ISOMERS of each other. One type of isomerism, called sterioisomerism, occurs when the same atoms or groups, are joined together but differ in their arrangement in space. The existence of two isomers of glucose is important because it is linked to the way in which polysaccharides are formed and subsequently their roles. A glucose molecule can switch spontaneously from the open chain form to either of the two ring forms and back again. As glucose is respiratory substrate, it is a very important source of energy in living organisms. Glucose is an important building block as it is used to build up more complex carbohydrates e.g. Starch, Glycogen and Cellulose. It is a substrate, which gets broken down by the enzymes in the yeast. ENZYMES are defined as biological catalysts. A catalyst is a substance, which speeds up a chemical reaction, but remains unchanged itself throughout the whole reaction. Enzymes are biological because they are protein molecules made by living cells. ...read more.

and out into the sink. This water does not come in contact with the actual ethanol solution being heated; its purpose is only to keep the apparatus cool. At the bottom of the condenser there is an opening to which a receiver adapter is connected which delivers the distilled ethanol into a conical flask. The apparatus was held in place using two clamp stands. Inside the ethanol solution some anti bumping granules were added in to keep the movement if liquid under control. Once all the apparatus was set up, the Bunsen burner was lit on the orange flame (hole fully opened). The Bunsen burner was resting on a heatproof mat, which protects the surface underneath. Extra car and precautions were taken whilst lighting the Bunsen. A lab coat was worn to protect clothing, all long hair was tied back to prevent it catching alight if it came in contact with the flames and most important of all, safety spectacles were worn to protect the eyes from getting damaged if anything was to go wrong. The Bunsen flame changed to the blue flame but not roaring, as this would be too high. The ethanol solution was heated until the temperature reached 70oc. Care was taken that the temperature would not rise above this by keep taking the Bunsen away from underneath the experiment. This had to be repeated several times before enough ethanol was collected for the next stage. At one time the temperature had risen above 70oc which ruined the experiment. The reason being that ethanol condenses at roughly 70oc and when the temperature went above this, other products also condensed therefor the ethanol obtained was not pure. To correct this mistake the liquid collected in the conical flask was poured back into the pear-shaped flask by lifting the tube above the flask Once the temperature reached 70oc the Bunsen was moved away quickly. ...read more.

In beer production to get different types of them, different yeasts are used compared to vinegar production. These yeast can also tolerate higher temperatures compared to the yeasts used for vinegar production. The reaction conditions used in beer and vinegar productions are different. In beer manufacturing a number of stages have to be carried out. These are malting, milling, mashing, sparging, boiling, cooling fermentation and conditioning of the end result, beer. The temperatures used are very high and on the whole the manufacturing of beer is a lengthy process. Recently, there have been developments to produce both wine and beer by continous fermentation methods. In these processes, the yeast is kept in its exponential growth phase, so the product is made much more quickly. This process is particularly popular for making lager, which can be made in about four hours instead of several days. However, although this process is more economical, the flavour and alcohol content are reduced. Vinegar is produced by the oxidation of ethanol. Traces of other compounds such as esters, alcohols and organic acids give variations in the flavour. The source of material used for the initial alcoholic fermentation reflects materially locally available i.e. cider vinegar comes from the fermentation of apple jiuce, wine vinegar comes from grape juice, malt vinegar from barley or other cereal that has undergone the malting process and rice vinegar from rice. Traditional methods developed for the commercial production of vinegar encourage the aerobic activity of bacteria such as ACETOBACTER and GLUCONOBACTER. The slow methods produce a high quality vinegar, whereas that produced by the quicker methods tends to have poorer flavour. The quality can be improved by allowing the vinegar to undergo a maturation process, standing in barrels. The vinegar is generously pasteurised by heating for a few seconds at 60 - 66 degrees. What we carried out was much simple compared to industrial processes i.e. in industry, different yeasts and enzymes are used to get the required product. ...read more.