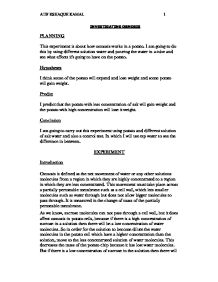 Osmosis, This experiment is about how osmosis works in a potato. I am going to do this by using different solution water and pouring the water in a tube and see what effects its going to have on the potato.

INVESTIGATING OSMOSIS PLANNING This experiment is about how osmosis works in a potato. I am going to do this by using different solution water and pouring the water in a tube and see what effects it's going to have on the potato. Hypotheses I think some of the potato will expand and lose weight and some potato will gain weight. Predict I predict that the potato with less concentration of salt will gain weight and the potato with high concentration will lose it weight. Conclusion I am going to carry out this experiment using potato and different solution of salt water and also a control test. In which I will use tap water to see the difference in between. EXPERIMENT Introduction Osmosis is defined as the net movement of water or any other solutions molecules from a region in which they are highly concentrated to a region in which they are less concentrated. This movement must take place across a partially permeable membrane such as a cell wall, which lets smaller molecules such as water through but does not allow bigger molecules to pass through. It is measured in the change of mass of the partially permeable membrane. As we know, sucrose molecules can not pass through a cell wall, but it does affect osmosis in potato cells, because if there is a high concentration of sucrose in a solution then there will be a low concentration of water molecules. ...read more.

To make the experiment fair I measured the potato accurately before cutting. I also carried out a control test in which I used tap water to see w hat happens. I saw that the potato swelled up because water entered the cells by osmosis. I weighed the potato before putting the solutions in. Improvements I could have been made through the measuring of the length of the potato chip as I found this very hard, I could have used a ruler along with a microscope to see exactly that I was cutting on the mm mark rather than a couple of mm away. A more defined measuring cylinder could have been used too. I could have used a bigger cylinder with spacings easier to measure to. I could have included more observations as they only really said what the pieces felt like, not what they looked like which would have been easier to compare. My test could have being unfair because when I cleaned the potato I might have lost its skin due it and might have squashed it a little when I was drying it. I could have measured the potato cells after the experiment to see if the salt water is affecting the size of the potato. ...read more.