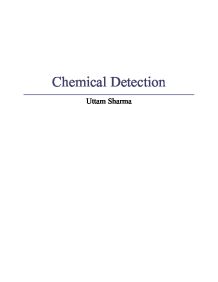 Our experiment consisted of two samples of water containing unknown substances, and our objective was to identify the compound present in the substance.

Chemical Detection Uttam Sharma CHEMICAL DETECTION Introduction In this CDA, I will attempt to explain everything about our experiments which we performed in class. We did these experiments in order to identify the substance present Our experiment consisted of two samples of water containing unknown substances, and our objective was to identify the compound present in the substance. Since the substance was dissolved in water, we had to separate the water from the substance, and then execute a series of tests which would eventually help us to determine the substance in the sample. Water Water (H20) is vital for all types of life, animals and plants. A molecule of it is made up of two hydrogen atoms and one oxygen atom. It has freezing point of 0�C and a boiling point of 100�C at sea level (on top of Mount Everest it boils at just 68?, due to changes in atmospheric pressure). Water covers 71% of the Earth's surface and is colourless and odourless (no smell). It is used every day for drinking, washing up, farming and in many other important places. This is where hard and soft is important. Hard water is water that contains large amounts of minerals. Mostly it comprises of are the cations of calcium (Ca2+) and magnesium (Mg2+). There are other metals present in hard water such as bicarbonates and sulphates. Calcium comes into the water through in the form of limestone or chalk (calcium carbonate CaCO3) or calcium sulphate (CaSO4). Hard water doesn't lather with soap easily, which is why you need a lot of soap to get a lather. When rain water contains dissolved carbon dioxide from the atmosphere, calcium carbonate reacts with it to form calcium hydrogencarbonate. Temporary hardness of water is caused by calcium hydrogencarbonate. Heating the water decomposes the calcium hydrogencarbonate and therefore, making the water more 'soft'. This is why in kettles, where water is heated, calcium carbonate forms as scale. ...read more.

Apparatus * Substance(s) to be tested * Bunsen burner * Heat-proof mat * Nichrome wire loop * Beaker * Hydrochloric acid (HCl) Method 1. Place the heat-proof mat on the table and the Bunsen burner of top of it. Plug the Bunsen burner into one of the gas taps using the flexible rubber tube. 2. Get a splint and light it from someone else who has their Bunsen burner already lit up. 3. Turn the gas tap on. 4. Making sure the nozzle on the Bunsen burner is fully closed, light it up and a safety flame should start up. 5. Open up the nozzle so it's half-open. 6. Use the Nichrome wire to scoop some of the substance to be tested. 7. Hold the wire loop in the middle of the blue flame and a distinctive colour should be produced, if the substance is a cation that is. 8. Note down the colour and, using a reference table such as TABLE 1, identify the cation. -If there are more substances to be tested- 9. Dip the wire loop in the hydrochloric acid. 10. Repeat from Step 6. Resulting flame colour Symbol Metal cation Brick red Ca Calcium Lilac K Potassium Green Cu Copper Blue-green Cu Copper Intense yellow Na Sodium Blue Pb Lead Dark red Li Lithium Explanation for the steps 1. The heat-proof mat prevents the heat from the Bunsen burner conducting through to the table and eventually burning it. This is important as we don't want to damage any tables. Also, it is useful for stubbing out splints after they've been used. 2. The splints we use are thin pieces of wood which quite easily catch fire and are cheap to replace. The only way to ignite the gas is to already have a fire and that through either a lighter or a lighted splint from someone else's fire. 3. The gas taps allow gas to come through and enable the Bunsen burner to work. ...read more.

For instance, when doing the flame test, if the metal cation is sodium, we know that the colour we're expecting in 'intense yellow', regardless of the amount of sodium we use. However, when we do this test, we don't know how much lather to expect because that's relative to the amount of sample and soap solution you use. Additionally, we forgot to compare our results with others' results. If we did this, we could find out if sample A really didn't produce a lather to our standards. Validity in stage 3 Our test was quite valid since, instead of washing the conical flask and bung, we used new ones of each. I think that one of the reasons for getting no results for sample may have been down to the fact that we set the 'benchmark' too high. I think this because we executed the experiment, for some unknown reason, on sample B first; and that happened to be the sample which was the soft water. Now we knew that soft water produced a lather better than hard water (for the same amount of soap), but we didn't know that the difference between them would be this high. When we had to shake the flask about to try and create a lather, it wasn't very fair because every single time (after 1cm3 of soap solution was added) we shook it, we shook it in different directions, and we shook some much longer than others. What's more, other people in my group had to shake it as well, and their styles were different to everyone else's style of shaking. How validity could've been improved in stage 3 If we did the experiment again, I would set the standard for lather much lower than it was the day we did this experiment. I think that next time we would have only one person shaking the conical flask and they would try to shake it as identical to the last shake as possible. This would help make our test a fair test; and fair testing is crucial for valid results. ...read more.