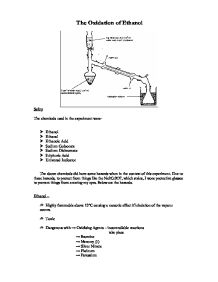 The Oxidation of Ethanol Safety The chemicals used in the experiment were- > Ethanol > Ethanal > Ethanoic Acid > Sodium Carbonate > Sodium Dichromate > Sulphuric Acid > Universal Indicator The above chemicals did have some hazards when in the context of this experiment. Due to these hazards, to protect from things like the Na2Cr2O7, which stains, I wore protective glasses to prevent things from entering my eyes. Below are the hazards. Ethanol - Highly flammable above 13�C causing a narcotic effect if inhalation of the vapour occurs. Toxic Dangerous with � Oxidising Agents - incontrollable reactions take place � Bromine � Mercury (??) � Silver Nitrate � Platinum � Potassium Ethanal - Extremely flammable above -27�C Harmful - risk of irreversible effects Dangerous with sulphuric acid - evident polymerisation reaction May occur Ethanoic Acid - Corrosive � Severe Burns � Flammable above ...read more.

Below are the observations for the experiment in the order of observing them. At the very beginning when I added the concentrated sulphuric acid to the water I noticed as I held the pear shaped flask that it began to heat up. This meant that the reaction between the acid and the water was an exothermic one meaning it gave out heat to the surroundings as energy was released. The next step involved mixing of the sodium dichromate, which was a bright orange solid, and the water with the ethanol, which was a clear solution. The reason for this was because the reaction between the two solutions caused it to continue boiling. The resulting solution was a bright orange colour due to the sodium dichromate. ...read more.

Conclusion Therefore to conclude my experiment I can deduce from my results that oxidising ethanol produces ethanoic acid. This was proven from my two tests. The sodium carbonate test proves that the ethanol was oxidised into ethanoic acid because when added to the distillate effervescence occurred. This would only have occurred if the distillate were ethanoic acid. If it were ethanal then it would not have fizzled. The equation for this is- 2CH3COOH + Na2C03 2CH3COO� Na+ + C02 + H2O Effervescence The universal indicator test also proves that the distillate is an acid. This is because when added to the distillate it turns a bright red, which means it is a 1 on the pH scale. This would not have happened if ethanal was the distillate. The colour change during the experiment was due to the redox reaction-taking place. The orange dichromate ion (Cr2 O7� �) was reduced to a green chromium (???) ion (Cr�+). ...read more.

The student has shown a fair understanding of chemistry alcohols and their oxidation reactions. The coursework provides an above-average experimental details of oxidation reaction of Ethanol. Despite bringing unnecessary and not completely correct information into the topic, it gives a ...

The student has shown a fair understanding of chemistry alcohols and their oxidation reactions. The coursework provides an above-average experimental details of oxidation reaction of Ethanol. Despite bringing unnecessary and not completely correct information into the topic, it gives a very brief and solid explanation of the outcome of the investigation. Many experimental precautions have been taken into account when doing the actual experiment, but the reasons are not clear and properly given. There is no chemical equation for the main reaction which MUST be given in such a coursework.

The method of approach is acceptable but the experiment is not repeated to confirm the results. Brady's reagent is stated in the extra information however the compound is not used to test the outcome. The effervescence must be CO2 however a test is not given to confirm its presence. Universal indicator would not be a good indicator for such an investigation since the resulting compound from the same experiment must be used in different tests to confirm the presence of Ethanoic Acid. As the reaction is taking place under reflux, Carboxylic acid is definitely produced and not Ethanal since Aldehydes are produced only as a result of partial oxidation of Primary alcohols. The result of experiment is known from the past and the point of the coursework is to understand and do it completely as if you never knew it was going to happen "this way", however the author has to a certain extent used already known facts in his/her analysis.

There are no severe grammatical or spelling errors to be pointed out, however the usage of technical terms is not very strong and the writer needs to work on the way he/she puts her answer on the paper as it carries them a lot through their GCSE/IGCSE exams and even later in the Advanced Level chemistry.