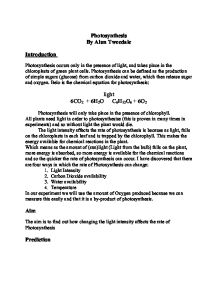 Photosynthesis By Alun Tweedale Introduction Photosynthesis occurs only in the presence of light, and takes place in the chloroplasts of green plant cells. Photosynthesis can be defined as the production of simple sugars (glucose) from carbon dioxide and water, which then release sugar and oxygen. Belo is the chemical equation for photosynthesis: light 6CO2 + 6H2O C6H12O6 + 6O2 Photosynthesis will only take place in the presence of chlorophyll. All plants need light in order to photosynthesise (this is proven in many times in experiments) and so without light the plant would die. The light intensity affects the rate of photosynthesis is because as light, falls on the chloroplasts in each leaf and is trapped by the chlorophyll. This makes the energy available for chemical reactions in the plant. Which means as the amount of (sun)light (Light from the bulb) falls on the plant, more energy is absorbed, so more energy is available for the chemical reactions and so the quicker the rate of photosynthesis can occur. I have discovered that there are four ways in which the rate of Photosynthesis can change: 1. Light Intensity 2. Carbon Dioxide availability 3. Water availability 4. Temperature In our experiment we will use the amount of Oxygen produced because we can measure this easily and that it is a by-product of photosynthesis. ...read more.