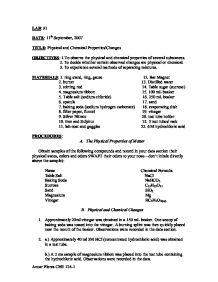 The first reaction with baking soda and vinegar was a chemical change due to the fact that the solution fizzed forming a new one and gas evolved thus outing the splint. The second reaction of HCl and Mg was chemical as well because magnesium dissolved and hydrogen gas evolved (both results of a chemical reaction between magnesium and HCl). The third conclusion drawn was the fact that sucrose mixed with water was a physical change. This was so because even though the sucrose dissolved it did not change chemically and could have been separated from the water back to its original form; moreover, when sucrose was heated it was another physical change as it changed state but remained the same compound, sucrose. Physical changes were also observed in the sand, salt and water mixture. The salt was ultimately extracted from the water through evaporation proving it was a physical change. After this, when the silver nitrate was placed in the sunlight a chemical change occurred as light reacted with silver ions thus changing the color of silver nitrate. Lastly, a final physical change was observed in the grinding of iron filings and sulphur powder because when the magnet attracted iron filings it showed that the iron did not change its identity but only mixed in with the sulphur powder. ?? ?? ?? ?? Anuar Flores CHE 124-1 ...read more.