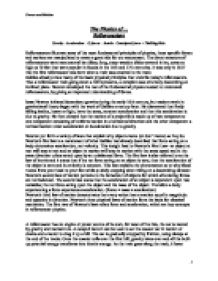 Rollercoasters illustrate some of the most fundamental principles of physics, these specific forces and motions are manipulated to create a great ride for our amusement. The direct ancestors of rollercoasters were monumental ice slides; long, steep wooden slides covered in ice, some as high as 70 feet that were popular in Russia in the 16th and 17th centuries. It was only in 1817 that the first rollercoaster was born when a train was attached to the track.

Galileo already knew many of the basic physical principles that underlie today's rollercoasters. That a rollercoaster train going down a hill represents, a complex case of a body descending an inclined plane. Newton developed the rest of the fundamental physics needed to understand rollercoasters, by giving an improved understanding of forces.

Isaac Newton initiated ideas about gravity during the early 16th century, but modern work in gravitational theory began with the work of Galileo a century later. He discovered that freely falling bodies, heavy or light, have the same, constant acceleration and that this acceleration is due to gravity. He then showed that the motion of a projectile is made up of two components: one component consisting of uniform motion in a horizontal direction and the other component a vertical motion under acceleration or deceleration due to gravity.

Newton put forth a variety of laws that explain why objects move (or don’t move) as they do.

The other force acting on you is acceleration. When riding in a coaster car that is travelling at a constant speed, the downward force of gravity is felt. When a coaster car is speeding up, the actual force acting on you is the seat pushing your body forward. But, because of your body's inertia that is separate from that of the coaster car, you feel a force in front of you, pushing you into the seat. You always feel the push of acceleration coming from the opposite direction of the actual force accelerating you. This force feels exactly the same as the force of gravity that pulls you toward the Earth. These G-forces are a measure of acceleration forces, where 1 G is equal to the force of acceleration due to gravity near the Earth's surface (9.8 m/s2, or 32 ft/s2).
A rollercoaster constantly changes its acceleration and its position to the ground, making the forces of gravity and acceleration interact in many interesting ways on your body.

At the top of a hill inertia may carry you up, while the coaster car has already started to follow the track down, you would briefly undergo free fall. Galileo was the first to recognise the connection of falling bodies; if a body starts from complete rest, it falls straight down, accelerating as it falls, however if it starts with some horizontal motion, the path it takes will be a parabola which points downwards. 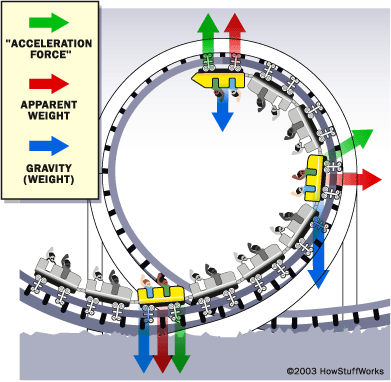 Rollercoasters are quite safe from a physics standpoint, as the forces always conspire to keep the rider in the car. The designers calculate the forces on the coaster to make it feel dangerous, but really be quite safe. However, these calculations are done assuming the rider does nothing unusual. If one stood up in a sit-down coaster, the calculations would no longer apply; therefore negative Gs could be enough to eject you. On a curve, your centre of gravity may end up above the side of the car, resulting in the serious danger of being thrown out.

Rollercoasters are driven almost entirely by basic inertial, gravitational and centripetal forces, all manipulated in the service of a great ride. Amusement parks keep upping the ante, building faster and more complex rollercoasters, but the fundamental principles of physics revealed by Newton and Galileo at work still remain the same.

4: This is a generally well written piece of work. The physics content is clear - and the author seems to have a good understanding of the topic in general. However, the essay suffers from a confused structure at time, and there are one or two points that would benefit from further clarification. Many of the descriptions of forces could be significantly simplified with a more extensive use of diagrams. The range of resources used is limited, but the author has considered resources that are appropriate for the given level.